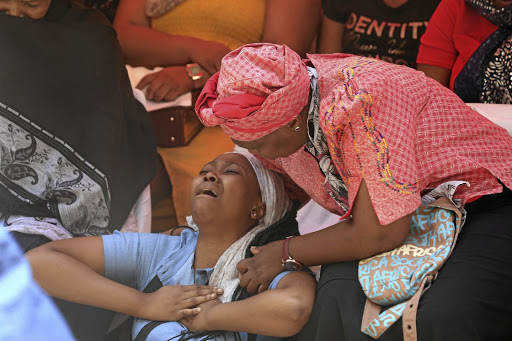 Grief-stricken Puleng Mphehlo during the memorial for her brother Tshepo, who was stabbed at school.
Image: Thulani Mbele

The grandmother of a grade 9 pupil who was stabbed to death with a pair of scissors by a classmate said her grandson had acted in a way that suggested he knew his days were numbered.

Speaking at Tshepo Mphehlo's memorial service yesterday, Annah Mosebe, 68, said it seemed as if Tshepo knew he was about to die.

She also wished for Tshepo's attacker and his family "God's protection".

"Last week, he (Tshepo) told his mother that he wanted to visit me. When his mother said it was fine, he said his mother was going to miss him. On Monday morning, he left 30 minutes early saying he had lots of school work.

"He tried to show his mother that he will be leaving her soon. What happened is God's will and the suspect did not know what he was doing and he is still our child.

"May God protect him and his home," Mosebe said at the memorial service that was held at Thuto-Tiro Comprehensive School in Zone 10 Sebokeng, south of Johannesburg, where Tshepo was murdered.

The case against the 15-year-old pupil accused of stabbing a schoolmate to death with a pair of scissors in Sebokeng has been provisionally ...
News
2 years ago

Tshepo's sister Puleng, 19, sat on the concrete floor sobbing and wailing until she was led away by two family members. Their mother, Dikeledi, 44, who was wearing a black cape, was comforted by family members as she broke down in between the speeches.

Thousands of people, including pupils and community members, gathered at the school's assembly point for the memorial service.

Thabang Thulo, 15, who shared a desk with Tshepo, described him as someone who was talkative.

"We were waiting for our teacher and the class was noisy. We were discussing the Orlando Pirates and Kaizer Chiefs game when I felt my chair moving; and when I looked, he was lying on the floor holding his chest," said Thabang.

His class teacher, Kedibone Mofube, said Tshepo's death had hit home as she had just buried her father. "I was with the grade 8s when the incident happened. They told me that something had happened in my class and indeed when I went there, there was lots of blood. It was then that I heard he was no more. I am deeply saddened by his death."

His friend Katlego Hloahloa said he'd remember Tshepo for the lunch boxes they used to share together.

A grade 6 pupil from Bloemfontein, who was stabbed to death at the weekend, is expected to be buried on Friday
News
2 years ago

Schools have become dens of violence. This time it was Tshepo Mphehlo's turn to fall victim to the senseless violence this country has witnessed in a ...
Opinion
2 years ago

A grade 9 pupil from a Mossel Bay school was stabbed to death on Monday morning by three schoolmates in full view of teachers and other pupils.
News
2 years ago
Next Article