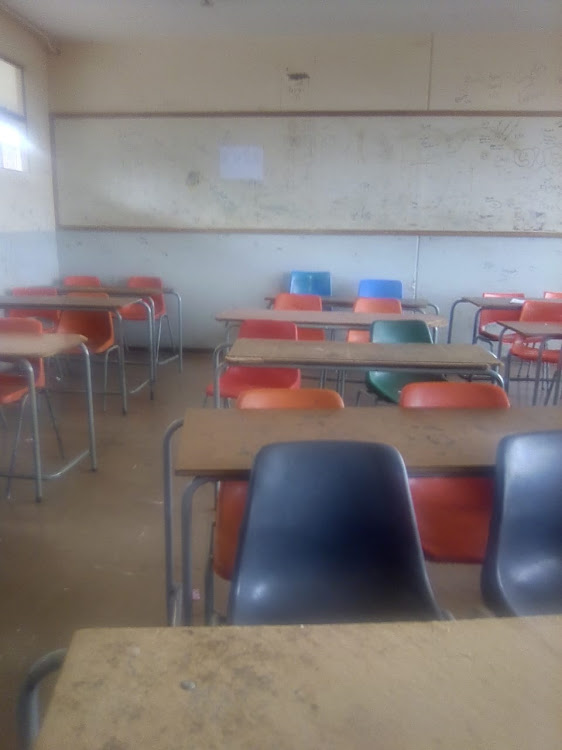 A pupil has been stabbed to death at Thuto-Tiro Comprehensive School in Sebokeng.
Image: Yoliswa Sobuwa

A 14-year-old pupil was stabbed to death at Thuto Tiro Comprehensive School in Zone 10, Sebokeng, south of Johannesburg, on Monday morning.

According to district director Victor Thetha, the incident happened when there was a change of class at 10am on Monday morning. Both boys are doing grade 9 and the boy was stabbed by a fellow pupil. Thetha said the boy was stabbed in the chest with a pair of scissors by a 15-year-old boy.

"He died while waiting for the paramedics at the school 's sickroom," he said.

"We had an unfortunate incident at the school. Two learners were playing in class and the stabbing occurred. As to what triggered the incident is unknown at the moment," Thetha said.

Police spokesperson Capt Fikile Funda said they had already arrested the 15-year-old suspect and police are investigating a case of murder.

Meanwhile, a group of parents demanded for the pupils to be sent home.

Parents have gathered outside the Thuto Tiro Comprehensive School demanding that their kids be sent home after a 14-year-old pupil was stabbed to death on Monday morning. @YoliswaSobuwa pic.twitter.com/C5mXz9x02w

Student drugged and raped at party

A 33-year-old man has been arrested for the rape of a female university student in Johannesburg.
News
2 years ago

A 20-year-old KwaZulu-Natal man has been arrested for the murder of UKZN student Sinethemba Ndlovu.
News
2 years ago
Next Article