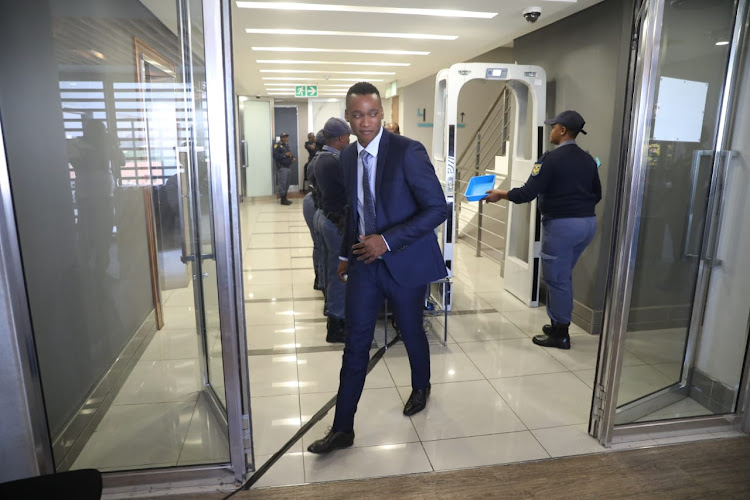 Former president Jacob Zuma's son, Duduzane, arrived at the state capture inquiry on Monday with an entourage of lawyers as he begins his first day on the stand.

Zuma is a known business associate of the Gupta family, his name surfacing in allegations of state capture as the person who facilitated meetings between prominent politicians and the Gupta brothers.

Last year, former ANC MP Vytjie Mentor told the commission that Zuma had approached her on a flight to China in 2010 and introduced her to two members of the Gupta family. Mentor‚ who served as the chairperson of the portfolio committee on public enterprises at the time‚ detailed the meeting that took place on an Emirates flight en route from SA to China‚ via Dubai. Mentor alleged that the people accompanying Duduzane were “Indian-looking” and identified one of them as Rajesh Gupta.

Former cabinet minister Ngoako Ramatlhodi also testified that Zuma had insisted on a meeting with him after he was appointed mineral resources minister in May 2014. At the meeting, Zuma wanted Ramatlhodi to meet the Guptas to explain rumours that he had been badmouthing members of the family.

Zuma was also said to have been present at a meeting where former deputy finance minister Mcebisi Jonas was allegedly offered the job of finance minister, as well as a R600m bribe, by the Gupta family. This was apparently in exchange for doing the family's bidding once he took office.

In March, former Denel CEO Riaz Saloojee admitted he attended three meetings with members of the Gupta family at the behest of their business ally, Salim Essa, within the first six months of his appointment at the state-owned armaments company. In one of those meetings at the Guptas' Saxonwold, Johannesburg, home, Zuma was said to have been present. It was there that Saloojee was allegedly pressured to facilitate business deals between Denel and Gupta-linked businesses.

Duduzane Zuma in the state capture commission hotseat on Monday

It's official: Duduzane Zuma will take the stand at the state capture commission.
News
2 years ago
Next Article