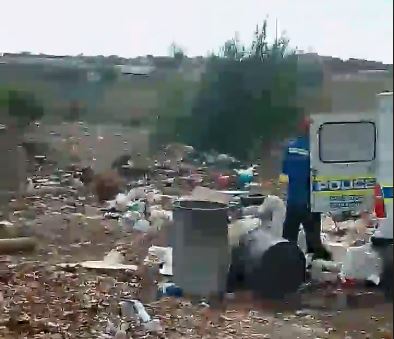 A video has emerged of a man emptying litter from the back of a police van into a heap of rubbish.
Image: Screengrab/Facebook

A DA ward councillor in Middelburg had described illegal dumping in the Mpumalanga town as "a big problem".

This comes after a video emerged of a man emptying litter from the back of a police van into a heap of rubbish.

Johann Dyason said he first saw the video, which had been taken at Klein Olifants River on Sunday, just before it was widely circulated on social media.

“We have a big problem and it is getting out of hand. People are just not adhering to the rules. It is even worse now that police are also doing it,” he told TimesLIVE.

In the video, two men can be seen emptying and sweeping rubbish, mostly papers, out of the back of a police van. No police officers are seen in the footage.

Dyason said he had been inundated with complaints from residents, and what was happening in the video was yet another setback for the mission of keeping the city clean.

“We have been getting a lot of complaints from concerned residents and I’ve reached out to schools and locals. We’ve cleaned a number of areas but, days later, people come dump again,” he said.

He said the video was a clear indication of how the issue of illegal dumping was taken lightly.

“It is disheartening and makes it  impossible for us to do our jobs. The municipality is also trying its level best,” he said.

Speaking about possible solutions, Dyason said hefty fines needed to be imposed on those who were found dumping illegally.

Police could not be reached for comment by the time of publishing.

Dyason said he had reported the matter to a waste-disposal company.

Man bust for killing woman after she turned him down.
News
2 years ago

Eastern Cape police have arrested a 26-year-old woman for alleged murder after the gruesome discovery of the burnt remains of a newborn baby boy ...
News
2 years ago
Next Article