A 'sorry' Zinhle Maditla wants court to give her minimum sentence 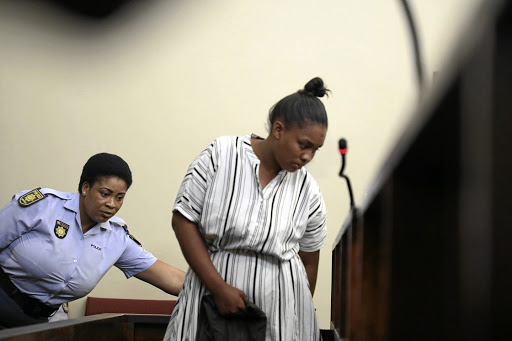 Zinhle Maditla, the 24-year-old mother accused of killing her four children, has asked the court for a lighter sentence.
Image: Thulani Mbele

Emotions ran high at the pre-sentencing hearing for a Mpumalanga mother who killed her four children by poisoning them, as she asked for forgiveness.

Zinhle Maditla, 25,  pleaded guilty to the murder of her four children, Minenhle, 8, Blessing, 7, Shaniqua, 4, and 11-month-old Ethen by feeding them rat poison on December 26.

Maditla told the Mpumalanga High Court sitting in Middelburg during mitigation that she had argued with her boyfriend whom she found with another woman when she went to seek money for Christmas clothes for the children.

“I would like to say I’m sorry to my family, especially my mother and the fathers of my children. I wish I can turn back the clock and if that was possible, I would act differently now,” she said before bursting into tears.

Zinhle Maditla, who stands accused of murdering her four children, has indicated that she now wants to apply for bail.
News
3 years ago

Judge Segopotje Mphahlele had  to take a break to give Maditla a chance to compose herself.

Maditla said she was remorseful on what she did and she was ready for a minimum sentence for her crimes.

She detailed to the court what led her unjustifiable actions.

“I went to the father of my two children who had promised to buy clothes for children and also buy us food. When I got there, I found out that he was with another woman and we argued then he hit me. While we argued, his mother asked us to leave her home and I asked why chase me away instead of the other woman.

“I left and while I was crying at the taxi rank, I saw people selling rat poison and I bought it. When I got home, I prepared food and I put in the poison; the children ate and I also ate it myself,” said Maditla.

Maditla said after feeding the children with poison, she sat inside the house and one of her children, Blessing, complained of severe headache and she went to the store to buy painkillers. She said she found the children “sleeping” when she returned.

The court also heard that on December 27, Maditla went to see her friends where they consumed alcohol and came back on the morning  of  the 28th.

On the 30th, she  went to visit another friend and confessed about the murders. She was advised to go to the police station.

She said while on the way to the police station, she was called by the landlord who told her that there are flies on her windows and there was a bad smell coming out of the house.

Prosecutor, advocate Nsika Mpolweni told the court that Maditla had all the time to make up her mind before committing the crime, considering the distance she travelled from her boyfriend’s house and preparing the poison.

“The offender, agreed to the minimum sentence, I would like the court to consider that,” said Mpolweni.

Judge Mphahlele postponed the sentencing to Friday while she studies the submissions.