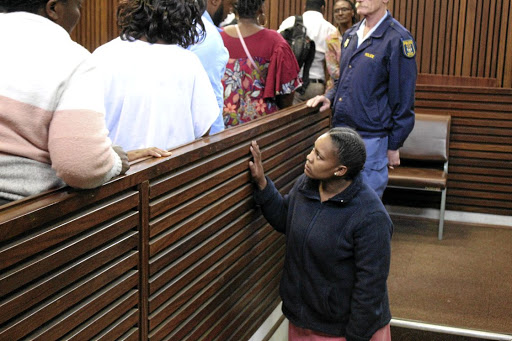 The family of the Mpumalanga woman who killed her four children doesn't want her to rot in jail.

In the same breath, Zinhle Maditla's family want her to serve time for the murders.

Maditla, 24, appeared in the Mpumalanga High Court sitting in Middelburg yesterday for mitigation of sentencing.

She pleaded guilty to the murder of her four children - Minenhle, eight, Blessing, seven, Shaniqua, four, and Ethen, who was 11 months old.

She told the court on Monday that she mixed rat poison with food for the three and also smeared it on her breast before breast-feeding Ethen in December last year.

She also told the court that she went to visit the father of two of the children and found him with another woman.

While in a taxi she saw a person selling rat poison and bought it. She also took some of the poison but survived.

Speaking outside court, Maditla's uncle Kevin Balance said: "We hoped the sentence will be passed today so she can start her time in prison. She is trying to cope in this situation and she's very sorry for what she did because she has even written a letter asking for our forgiveness in the family; and as a family, we forgave her a long time ago.

"In her letter, she wrote that she misses her children and how she wishes that she can reverse what happened but painfully, she will live without her children [for the rest of] her life," said Balance.

"Her mother is trying to be strong and as a family, we need justice to get served and Zinhle to learn a lesson, but the court must not sentence her and throw the keys away. She must not die in jail. We would love to see her back at home, if rehabilitated."

Judge Segopotje Mphahlele postponed the case to September 17 after Maditla's legal team asked for a letter from social workers in mitigation for sentencing.

A series of psychological evaluation reports have certified that the Witbank mother who allegedly poisoned her four children in December 2018 is not ...
News
2 years ago