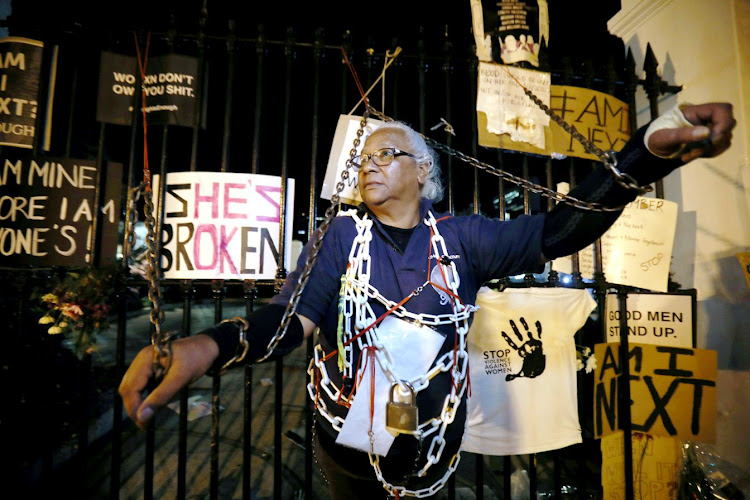 Venetia Orgill from Mitchells Plain spent Thursday night chained to the railings of parliament in Cape Town in a protest against gender violence.
Image: Esa Alexander

Cape Town pensioner Venetia Orgill gave up her bed and spent Thursday night chained to the fence outside parliament.

On Friday, Orgill, 62, said the rape and murder of women gave her sleepless nights. She decided to show authorities that women and children are prisoners in their own homes.

“[My close relatives] are victims of rape and the cases are pending in court,” she said.

“The plight of women and children, in general, is overwhelming. We are hoping that the government can declare a state of emergency.

"The reason we decided to stage the protest at night is because women are being murdered and raped at night and our bodies are discovered in the morning."

Venetia Orgill from "Discover your power" chained herself against the fence of parliament in solidarity for the women been raped and killed in South Africa @TimesLIVE @SundayTimesZA pic.twitter.com/MBroV5KDsK

Orgill, from Mitchells Plain, said she was undeterred by police who paced around her during her protest.

There has been heavy police presence in the Cape Town CBD this week. Police have had their hands full as throngs of protesters against women abuse marched on parliament and the World Economic Forum on Africa at Cape Town International Convention Centre.

This followed the murder of University of Cape Town student Uyinene Mrwetyana, allegedly by a post office clerk.

“The police did not speak to me personally but they spoke to people gathered around me," said Orgill.

Orgill said she would chain herself up again as long the scourge persists.

Iconic stage, TV and film actor John Kani has appealed to all men in the creative industries to stand up against gender-based violence.
News
2 years ago

President Cyril Ramaphosa’s special adviser on gender-based violence was shouted down on Wednesday when she attempted to address protesters who ...
News
2 years ago
Next Article