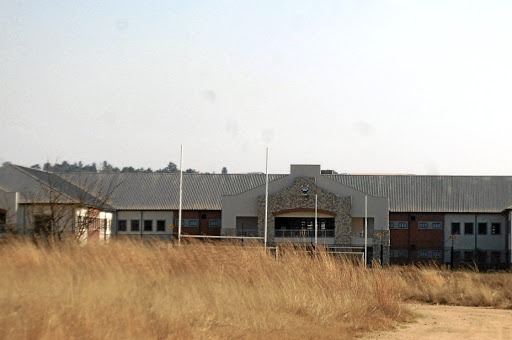 A 17-year-old boy has been expelled from Reddam House College in Midrand, Johannesburg, after he used the k-word to refer to black workers.

The incident happened last week at the school's ground on which general workers were playing against the school's senior five-a-side team.

The grade 10 pupil was heard by fellow pupils saying; "look at those black k***rs, they can't play soccer yet they want to take over".

School principal Colleen Traviss-Lea confirmed that the boy has since been asked to leave the college.

"Nothing can be more hurtful and damaging in our society today than racism, and we will not tolerate any form of it in our schools.

"We have offered counselling to the students [pupils] affected and mounted a full investigation into the incident.

Black parents who asked not to be named to protect their children at the school raised alarms that the school was not acting swiftly on the incident.

"Last week, black pupils reported the matter to the school's deputy principal who called a meeting with a group of pupils who were around at the time when the boy used the k-word. Pupils were told not to tell their parents about the incident," said one parent. 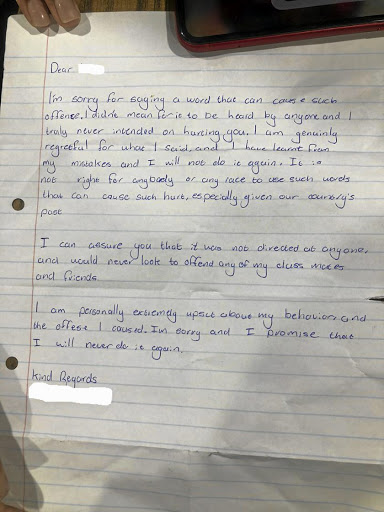 A letter of apology written by the expelled pupil

"On Thursday, the school principal called pupils to an assembly where she raised this issue and referred all pupils to the school's code of conduct. This is after she was confronted by four black pupils who wanted to know why the boy was not suspended as racism was a crime and people went to jail for it."

He said the boy was asked to write an apology letter which in part read: "I'm sorry for saying a word that can cause such offense [sic]. I didn't mean for it to be heard by anyone and I truly never intended on hurting you.

"I am genuinly [sic] regretful for what I said, and I have learnt from my mistakes and I will not do it again. It is not right for anybody or any race to use such words that cause such hurt, especially given our country's past.

"I can assure you that it was not directed at anyone and would never look to offend any of my class mates and friends ."

Parents protested that this sanction was not enough and complained that black pupils at the school were often suspended for minor offences.

"All we wanted was for the school to act on this issue and make sure it doesn't happen again," said another parent.

The parent said the school only acted on the matter after they received a media inquiry from Sowetan.

On Wednesday, the school sent an open letter to parents, apologising for the use of the racial slur at the school.

"Last week, you may have heard reports of a racist slur in our college. This is our stance at Reddam House Heldrefontein. Should an incident of this nature occur within our school, we take swift and speedy action, as the code of conduct stipulates.

By agreeing to perform 160 hours of community service in a Soweto-based community organisation, Adam Catzavelos -- the man who used the k-word while ...
News
2 years ago

"Our first action will always be to offer counselling support to the students [pupils] affected. Because racist slurs are such an anathema to our value system, our South African Constitution and our Reddam House Code of Conduct, immediate suspension and a consequent disciplinary hearing will be conducted.

"There are some interventions that could have been taken to ensure that he learns from the incident," said Jones.

"There may be underlying causes which the school did not deal with, and by expelling him they are only dealing with the symptoms."