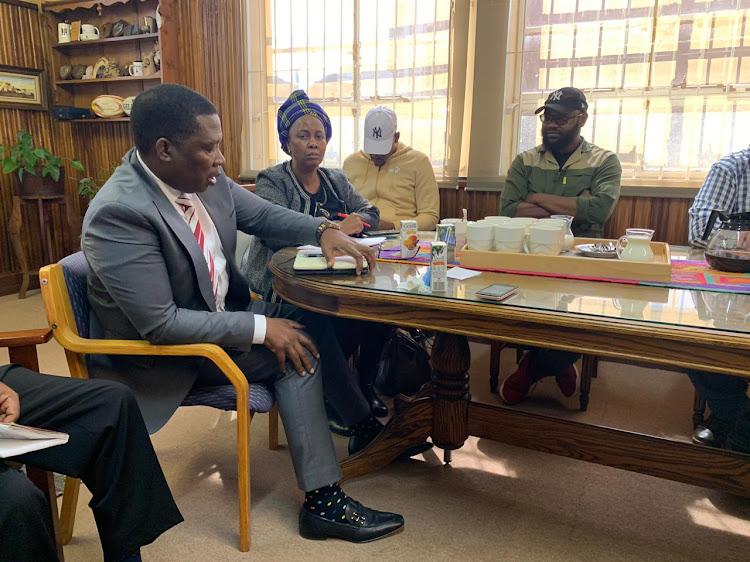 MEC for Education in Gauteng, Panyaza Lesufi, during a meeting with Monument High School in Krugersdorp on Friday.
Image: Supplied/ Gauteng Department of Education

Gauteng education MEC Panyaza Lesufi has given those involved in an alleged bullying incident at Monument High School in Krugersdorp two days to explain why they shouldn't be expelled.

Lesufi visited the school on Friday after a video of a pupil being assaulted by another, in full view of schoolmates, made the rounds on social media.

In the video, one pupil is seen holding another by his shirt, pushing him about and to the ground. One boy can be heard saying, “You smell like fokken zol [dagga]. Come. You want to swear my mother like that! Come.”

The attack appears to take place on the school grounds. Those watching on seem unfazed at the scenes playing out in front of them.

Lesufi said he had met the school's managers and parents of the pupil who had been attacked.

“We've arrived at a decision that affected learners must within 48 hours indicate why they shouldn't be suspended. The school was severely reprimanded for not officially reporting the case,” he tweeted after the meeting.

Speaking outside the school, Lesufi said an investigation was under way to determine events leading up to the incident and why it was not reported formally.

“It is quite clear there are many areas where things didn't happen the way we want them to happen, for example, the school didn't report the matter formally to the district and that's a serious breach of our protocols. We can pick many other things that were misrepresented ...

“Once we get a report into all the allegations, we will act ...”

Lesufi further said an urgent disciplinary hearing had been convened so that a “decisive” decision could be taken.

“No learner has the right to bully or harm fellow learners. If you do that, we will act and act decisively,” he added.

MEC Lesufi to launch another specialisation school in Soweto

Gauteng education MEC Panyaza Lesufi will launch another school of specialisation with a focus on finance, hospitality and tourism. The Pace ...
News
1 year ago