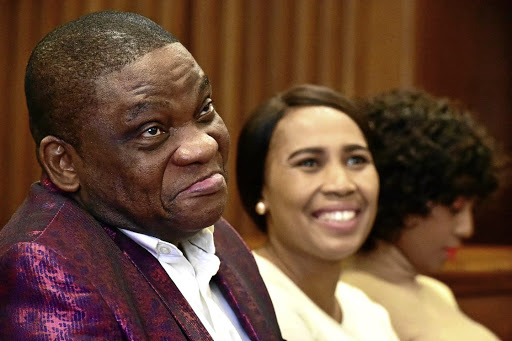 Nigerian pastor Timothy Omotoso has questioned whether the high court in Port Elizabeth has jurisdiction over his case.
Image: Eugene Coetzee

Does the Port Elizabeth high court have the authority to preside over matters that did not take place within the court's jurisdiction?

This was the crux of the argument that the defence put forward in the case of alleged rapist Timothy Omotoso.

The trial was delayed yet again on Friday as concerns were raised by the legal team representing Omotoso and his co-accused about the centralisation of the charges against them.

They argued that the charges of human trafficking, racketeering, rape and sexual assault had allegedly taken place in Secunda, Richards Bay, Bloemfontein and Umlanga Rocks, among other places. This, they said, did not fall within the scope of the Port Elizabeth high court's jurisdiction.

The state was yesterday accused of withholding vital information by the defence of alleged sex pest Nigerian pastor Timothy Omotoso, 60, in the Port ...
News
3 years ago

Peter Daubermann, who is representing Omotoso, 60, Lusanda Sulani, 36, and Zukiswa Sitho, 28, argued that out of the 63 main and 34 alternative charges the trio face, only seven of the main charges could be heard in Port Elizabeth.

According to Daubermann, five counts of rape, one of trafficking of persons for sexual purposes and one of sexual assault, were the only charges the trio could plead to as those offences were allegedly committed in Port Elizabeth.

All three pleaded not guilty to the specific charges.

State prosecutor Nceba Ntelwa told the court that he had copies of the authorisation certificates to centralise the charges to be heard in Port Elizabeth, signed off by then national director of public prosecutions Shaun Abrahams.

After a short adjournment to allow Daubermann to peruse the documents, Ntelwa submitted them to the court. Daubermann did not object to this.

Daubermann, however, emphasised to the court that he had told Ntelwa on Thursday afternoon that he would oppose the reading in of the charges that fell outside the jurisdiction of the court.

The trial of alleged rape and human trafficking accused pastor Timothy Omotoso and his two co-accused is expected to begin afresh on Tuesday in the ...
News
3 years ago

Judge Irma Schoeman asked Daubermann if the previous certificates were still valid. He  conceded they were, arguing however that the authorisation certificate for the charges to be centralised lacked vital information such as the case number. He added that the indictment was not attached and that Abrahams had not specified which charges the trio faced.

“It is a two-page document with no indictment. One cannot speculate that the indictment referred to [in the certificate] is the one currently before the court,” Daubermann said.

Schoeman said her main concern in the matter was that the certificate was issued on April 13 2018, but the indictment currently before the court was signed off on July 1 2019.

“How do I know if Abrahams had sight of this indictment?” Schoeman asked.

Ntelwa then brought an application to reopen the issue of jurisdiction, which Daubermann immediately opposed.

Shortly after the morning tea break, Schoeman ruled that the matter be postponed to Monday to allow the state to provide a new authorisation certificate to centralise the charges.

Daubermann said he would argue, on Monday, that the issue of jurisdiction could not be conferred during a trial and that he needed the weekend to consider further arguments on the matter.