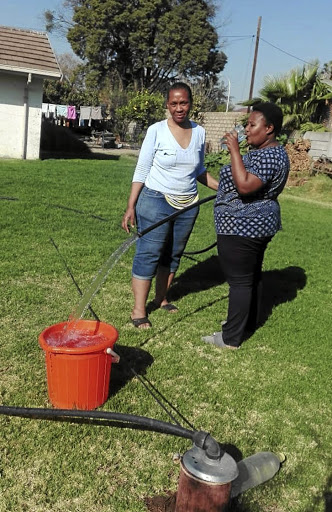 The City of Tshwane has been given until Friday to deliver clean drinking water to residents of Hammanskraal.

The SA Human Rights Commission issued the ultimatum to the city yesterday after tests declared water in the area was  not safe for human consumption.

The commission conducted tests on the water with the help of the Council for Scientific and Industrial Research (CSIR) after residents lodged complaints with it.

Hammanskraal has had a water problem which includes poor quality and intermittent water cuts spanning over 10 years, residents said.

The HRC visited the area last night to give feedback about the quality of water based on the CSIR tests.

The commission's Gauteng head Buang Jones said the city was given until Friday to provide "alternative potable water for the people of Hammanskraal".

"We are also giving the residents an opportunity to unpack their lived experiences as they have been consuming this water for over a decade now, and we want the city to come up with interim measures by Friday," Jones said.

Several residents told Sowetan that their tap water hasn't been drinkable for years with some resorting to buying water, drilling boreholes while others were forced to boil their tap water before drinking it.

Phuphuu Matseke and his wife Annah, of Renstown in Hammanskraal, drilled a borehole at a cost of R30,000 two years ago after their tap water became undrinkable.

The Department of Water and Sanitation is taking the City of Tshwane to court over the poor quality of tap water in Hammanskraal.
News
2 years ago

"I had been using my bakkie on weekends to fetch water in Pankop, about 40km away, because our water was either smelling of faeces, brownish or white in colour since about 10 years ago," he said. "Government is failing us. We don't want to get into politics; we merely want basic services."

Their neighbour Smangele Mahlangu said her family was forced to dig deep and also drill a borehole.

"We pay a flat rate for water of around R270 a month yet supply gets cut regularly and people have to get water from municipal water tanks.

"How do you explain water smelling of poo as if it's water straight from a toilet?"

The City of Tshwane is adamant that water gets contaminated somewhere down the line in the water network.

Mayor Stevens Mokgalapa's spokesperson Omogolo Taunyane said: "The water we supply to Hammanskraal is not below standard, the water that leaves the plant and the water that gets out of taps of residents is not of the same quality. We will look into what's in the network that causes that."