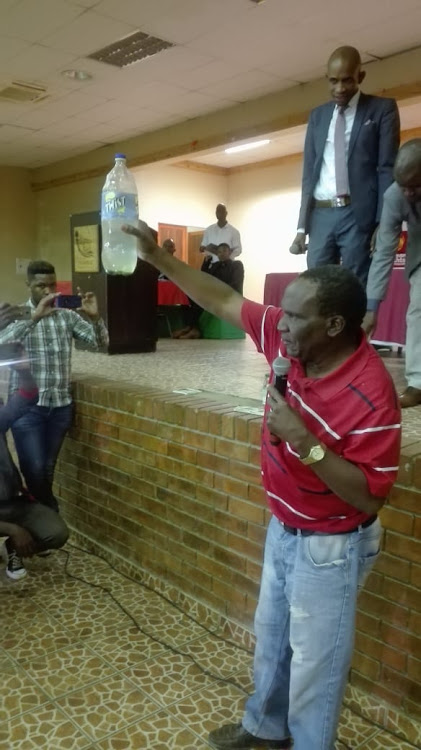 A Hamaanksraal resident shows officials from the department of water and sanitation and the SA Human Rights Commission samples of "dirty water" he has been collecting from his home tap over three months. The commission has called a meeting to give residents feedback about the poor quality of their water as per the results of tests by the CSIR
Image: Isaac Mahlangu

The Department of Water and Sanitation is taking the City of Tshwane to court over the poor quality of tap water in Hammanskraal.

This was announced by the department's Gauteng Provincial Head Sibusiso Mthembu to the residents of Hammanskraal at a meeting organised by the SA Human Rights Commission on Tuesday evening.

Mthembu said the department had presented a plan to the City which would have ensured that the water crisis in the area was addressed but blamed Tshwane of dragging its feet on implementing the crucial plan.

"We've taken the city to court to ensure that there's clean water in Hammanskraal, we're pushing hard for the court to sit so that the city is forced to act," Mthembu said.

Mthembu told about 400 residents who attended the meeting held at a local community hall that their water was found to contain a high concentration of nitrates and fossils making it unfit for human consumption.

"We are not doctors but what we can tell you though is that the high concentration of nitrate and fossils is not good for the human body," Mthembu said.

Residents told the meeting that some have lost members of their families due to illnesses they believe were brought on by the 'dirty poisonous water' they have been consuming for more than a decade.

Tshwane mayor Stevens Mokgalapa was also expected to attend the meeting but his office said he was stuck in a special council meeting which overran.

Hammanskraal has had a water problem which spans over 10 years.