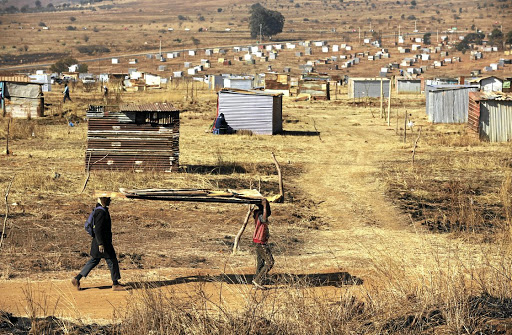 Residents of an informal settlement erected shacks at Merry Farm, a piece of land in Lenasia South, resulting in violent clashes with Ennerdale residents at the weekend. / SANDILE NDLOVU

The government had eyes on a piece of land that is at the centre of violent clashes between residents in Lenasia South, south of Johannesburg.

The owner of Merry Farm, Christian Merry, 52, yesterday told SowetanLIVE that the government initially approached him to buy the land.

"About seven years ago, the government contacted me about buying this land for low-cost housing. But they didn't buy it and it's still under my family's name," Merry said.

He said he had no problem with selling and was waiting for the government to approach him.

"We don't use that land anymore. It was a diary farm until my father got ill and passed on. We then left it as it was, but gave a small portion to some of the people who worked on the farm with him while the bigger part was left vacant," Merry said.

However, Gauteng human settlements MEC Lebogang Maile said he was not aware of a decision to buy the land from Merry. He said it would have to consider a number of factors and that processes would have to be followed.

Merry said he was shocked when he saw on the news that the land had been illegally occupied.

Manager 'thrown into fire' during violent 'farm invasion' in KZN

A farm manager in KwaZulu-Natal was hospitalised with burns on Saturday after "violent thugs" invaded a farm, set it alight and allegedly threw him ...
News
3 years ago

Ennerdale and Lenasia South residents clashed with the invaders at the weekend, demanding that they vacate the area as their presence devalued their properties.

Merry said he was six months old when his father bought the land.

Maile said he will set up a task team to find short-term solutions to the problems facing residents in the area, especially on the backdrop of the violent clashes.

"We'll come back and in that meeting, we want to be dealing with the roadmap and what must happen. We've agreed that the problem is complex. It doesn't need simplistic approach."

Lawrence Ntengemntu, a community leader who spearheaded the occupation, said the land was earmarked for development under former Joburg mayor Parks Tau's administration but the development was delayed.

Ntengemntu said the land was to be occupied by residents from Lawley Station and those who were backroom tenants.

"We know who the owner of the land is and we have been in contact with him. He knows about this but said he was waiting for the government to approach him with the right figure so that we could move onto the land," he said.

"But that was taking too long so we decided to erect shacks so that it wouldn't be hijacked by other people."