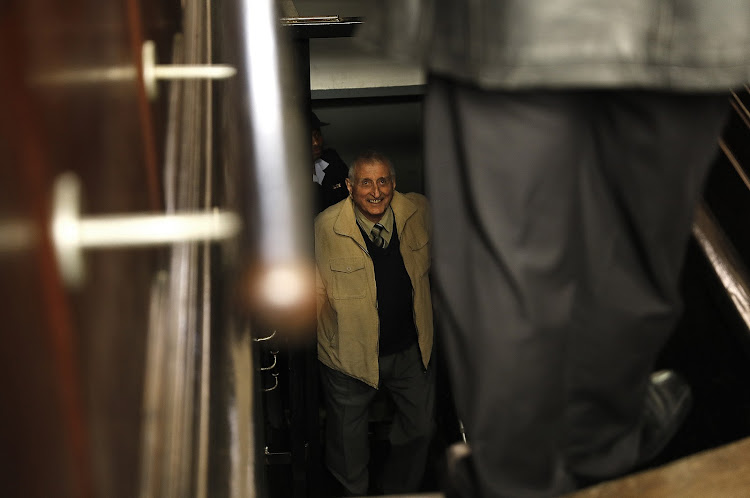 Former apartheid security policeman Joao Rodrigues, the apartheid policeman implicated in the murder of activist Ahmed Timol, is facing an uphill battle after a full bench of the high court dismissed his application for a permanent stay of prosecution.
Image: Alon Skuy

Many of the alleged perpetrators of apartheid-era crimes are dying, which means speedy prosecuting of those crimes is vital for families to find justice.

This was the view of former Truth and Reconciliation Commission (TRC) commissioner Yasmin Sooka outside the high court in Johannesburg on Monday.

Sooka was speaking after a full bench of the high court dismissed the application by former security policeman Joao Rodrigues for a permanent stay of prosecution. It was a decision Sooka described as being not about revenge but rather about justice and accountability.

Rodrigues made the application after being charged with the murder of anti-apartheid activist Ahmed Timol in July last year.

Timol died in 1971 after falling from the 10th floor of the then John Vorster Square police station in central Johannesburg, where he had been detained.

While the original inquest in 1972 concluded that Timol had committed suicide, the reopened inquest in 2017, headed by judge Billy Mothle, found that his death was a result of being pushed. It also recommended that Rodrigues be investigated.

Sooka was one of the six former TRC commissioners who were admitted into this case as friends of the court. They sought to offer the court their expertise in matters related to reconciliation, amnesty and the appropriate treatment of crimes committed under apartheid.

Sooka said when the TRC finished its work, it referred about 300 cases to the National Prosecuting Authority in 1999 for further investigation. These cases involved people who were not granted amnesty or did not apply to amnesty.

However, between 2003 and 2017, a decision was taken to stop investigations into these cases - apparently as a result of an executive decision taken at a higher level.

Sooka said Monday's judgment was a clear message to National Director of Public Prosecutions Shamila Batohi and her officials that they needed to do their utmost to ensure that these cases were properly investigated.

No reason not to prosecute Joao Rodrigues‚ argues Timol family

Joao Rodrigues‚ the man accused of being involved in the murder of anti-apartheid activist Ahmed Timol‚ cannot complain about the delay in his ...
News
2 years ago

Sooka said people expected some form of justice to follow the investigations, whether in the form of an inquest or an indictment.

"We are very concerned because already we have a number of perpetrators who are dying. We have just heard a month ago that the inquest of Neil Aggett will be reopened. But lo and behold, on the same day we heard that Steven Whitehead, who was the primary interrogator - and I would say an alleged torturer - also died."

Aggett was a doctor and trade unionist who died in 1982 after being arrested by the security police.

"This is a race against time. For many families, this is not just a 20-year wait. This has been going on for the past 40 years," said Sooka, adding that those families needed to know that the state would proceed with these cases without fear and do the utmost to deal with them as quickly as possible.

Former apartheid era security policeman‚ Joao “Jan” Rodrigues‚ is due back in court on Monday to face charges relating to the 1971 murder of ...
News
2 years ago

Sooka said Rodrigues was one of the people who refused to testify before the TRC about his past transgressions. "So this is the vindication of the rights of victims and their families to justice and accountability," she said.

"In fact, in this judgment, the three judges make this point that this is not about revenge or being vengeful. This is about justice and accountability, which our new society demands."

Timol’s nephew Imtiaz Cajee welcomed the court’s dismissal of Rodrigues' application. "This is a clear message to former apartheid-era policemen that crimes committed during those times won’t be swept under the carpet," he said.

"In the same breath, it gives hope to families of victims that they will one day get closure on the deaths of their loved ones."

The next court date for the trial of Rodrigues is scheduled for June 28, although this could be postponed if Rodrigues decides to apply for leave to appeal the judgment.