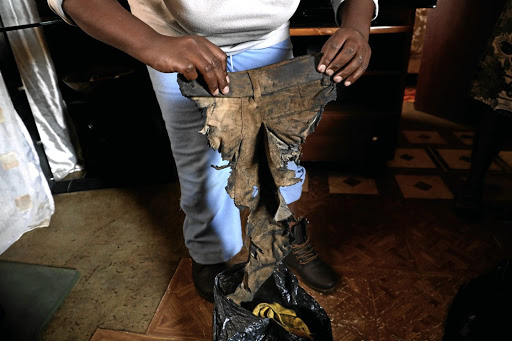 An aunt of the young man burnt in Daveyton shows the trousers that helped them identify him. /SANDILE NDLOVU

A 27-year-old man who was necklaced in a vigilante attack was a case of mistaken identity.

Rethabile Choshane's family yesterday said their son had nothing to do with a robbery he was attacked for at Qalabusha informal settlement in Daveyton, Ekurhuleni.

They said he was on his way to pick up some sorghum for his chickens at a nearby farm on Monday morning at about 5am when he was attacked by a mob after he was mistaken for a bag snatcher.

A woman was mugged and her attackers ran towards his direction and he was not given a chance to defend himself, said Choshane's aunt who did not want to be named.

"The worst pain a mother can feel is losing your child."

She said Choshane was employed as a security guard at a local bottle store.

"He was off on Sunday and he would be at home with his father or hung out with friends," she said.

Suspected robber necklaced and burnt beyond recognition in Daveyton

Police have launched a manhunt in Daveyton after a man was burnt to death at the Qalabusha informal settlement in Ekurhuleni.
News
2 years ago

Choshane, the aunt said, also owned a small chicken farm and had doves that he enjoyed taking care of.

She said they got worried when he did not come home and they started asking around. They were then told of a man who had been killed matching Choshane's description.

They rushed to the police station to enquire about the murdered man and were sent to the Springs government mortuary.

"We got there on Tuesday and found him and only his skull was left..." said the aunt.

She said the remains of his trousers and belt also confirmed it was him.

"We are broken, torn and traumatised. That scar can never be erased in our hearts."

Daveyton police station commander Lt-Col Kesivan Chittiah said the community should stop taking the law into their own hands.

"The man's case has saddened us, he was wrongfully accused and killed.

"However, investigations are under way and all those involved will be brought to book," said Chittiah.

In August, an 18-year-old man was assaulted, doused with petrol and set alight by a mob in the township.

The man, who later died in hospital, was accused of being affiliated to a local gang, the "Freaks", that allegedly terrorised the community.

Another victim, Njabulo Buthelezi, 20, was dragged out of his neighbour's house and beaten to death.

His family later disputed that Buthelezi was a gangster.

No arrests have been made regarding Choshane's murder.