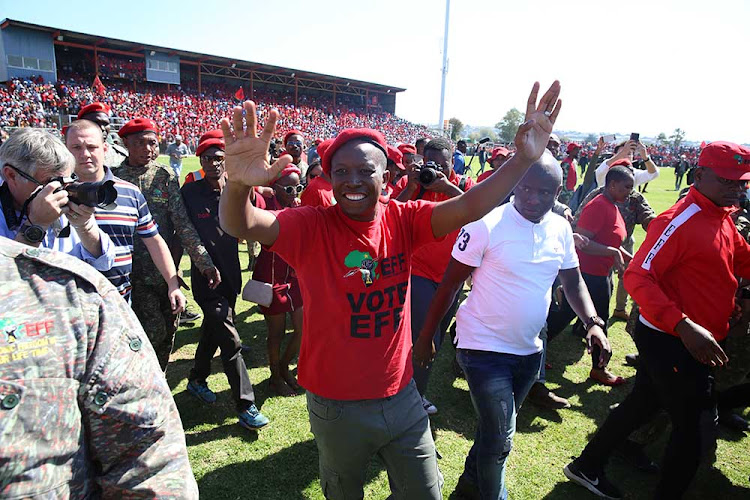 EFF supporters have come in their numbers to the May Day Rally held in Alexandra, Johannesburg where Julias Malema addressed them
Image: Thapelo Morebudi

EFF leader Julius Malema has warned the ANC to pray that the red berets to not take over power now because their leaders will be sent to jail.

Speaking to thousands of EFF supporters and Alexandra residents who filled the Sankopano stadium to capacity to celebrate Workers Day on Wednesday, Malema said conflicted ANC members, including president Cyril Ramaphosa, deserve to be incarcerated.

“We will send Ramaphosa to prison for killing people of Marikana. Their spirits will never rest for as long as Ramaphosa is at Union Buildings.

“Ramaphosa has taken a wrong turn; he is lost, he is at the wrong place. He’s supposed to be in Sun City prison, that’s where he belongs,” said Malema.

Ramaphosa was widely criticised by the Farlam commission of inquiry probing the Marikana shootings by police which resulted in 34 striking mineworkers being killed on August 16 2012.

President Cyril Ramaphosa is expected to address thousands of workers during a May Day rally in Durban on Wednesday.
News
3 years ago

At the time of the incident, the president was a non-executive director at Lonmin’s platinum mines, the employer of the striking workers, had requested in the form of emails, that stronger action be taken against the workers after a protracted strike.

Malema also promised to lock up former minister of social development who is now minister of Women in the Presidency Bathabile Dlamini for her role in the social grant saga, former Gauteng MEC for human settlements and now ANC treasurer Paul Mashatile, Gauteng MEC for economic development Lebogang Maile and Gauteng premier David Makhura for “stealing” money meant for the Alexandra Renewal Project.

This could be widely seen as Malema's election rhetoric, just six days before elections. Ramaphosa is the face of the party and has been traversing the length and breadth of the country to galvanise support for the ANC.

About R1.6bn was approved for the project which was meant to develop the economic and social environment of Alexandra and was billed as a joint urban regeneration project involving local, provincial and national government.

At least 48 parties are contesting the May 8 elections.