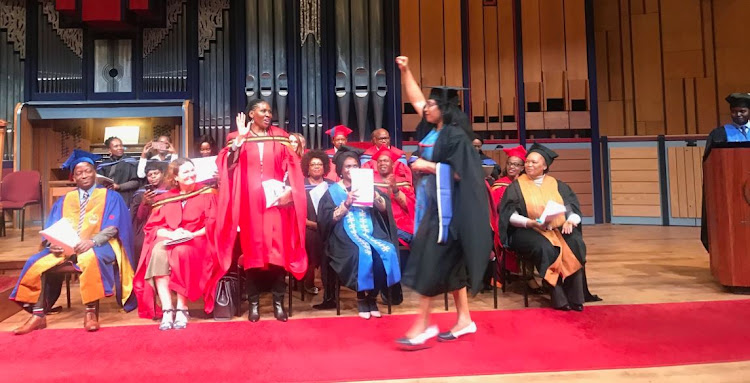 The EFF's circle of excellence keeps getting bigger.

Congratulatory messages continue to pour in after Hlengiwe Mkhaliphi, the party's deputy secretary-general, graduated with an honours degree in public administration from the University of South Africa (Unisa) on Wednesday evening.

The party's top leadership was out in numbers to celebrate her achievement. Deputy president Floyd Shivambu, treasurer general Leigh-Ann Mathys and national chairperson Dali Mpofu wore their graduation gowns and red berets as they cheered for Mkhaliphi from the front row.

Julius Malema, who was unable to attend, took to Twitter to convey a heart-warming message to his colleague.

My heart is sore as I won't be joining EFF Deputy Secretary-General @DSGmkhaliphi at the graduation ceremony of her Honours Degree in Public Administration tonight at Unisa. I'm very proud of you and congratulations once again my sister. We remain inspired. pic.twitter.com/eLAm1hLXDQ

Here are more images from the ceremony:

Congratulations DSG Hlengiwe Mkhaliphi for taking it again. We are now getting used to taking the #AcademicSelfie! That’s the EFF for you, we lead by example! pic.twitter.com/D6Kg3nf5b4

With the EFF Deputy Secretary General & Treasurer General moments before the commencement of DSG's graduation for her Bachelor of Administration Honours!✊?✊?????#EFFMakingEducationFashionable #CongratulationsEFFDSG pic.twitter.com/LdUyp4xdj1

The DSG forever making us proud and please keep on inspiring us. ⁦@DSGmkhaliphi⁩ pic.twitter.com/NkAcE0dMzJ

Malema tells leaders to go back to school

No South African will trust an uneducated leader after President Jacob Zuma. This has led to EFF leader Julius Malema and his party executives ...
News
4 years ago
Next Article