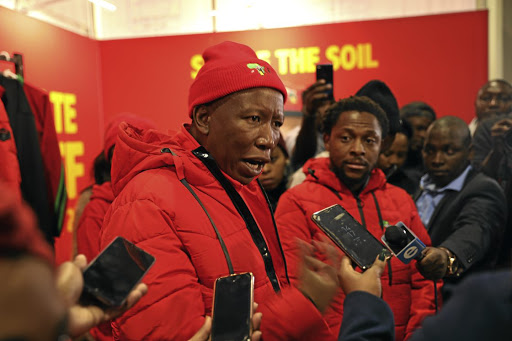 EFF leader Julius Malema has changed his tune about rubbing shoulders with the DA in government after the elections.

Attending his party's stand at the Rand Easter Show in Nasrec, Johannesburg, yesterday, Malema said he would dump the DA for burning its bridges.

"After insulting us like that, they expect to come and call us to sit and share a government ... I don't think this will work. We gave the DA power in Tshwane and Johannesburg.

"They are biting the hand that is feeding them and expect that hand to continue feeding them. It's unscientific; it won't work," Malema said.

His remarks follow accusations in the DA election posters that allude to the EFF's alleged involvement in the now defunct VBS Mutual Bank saga.

If current polls are anything to go by, a coalition deal to hand power in Gauteng to either the ANC or the DA could see the EFF negotiate for municipal mayoral committee posts in the City of Johannesburg or take control of the City of Tshwane, which are both governed by the DA through a coalition with other parties.

EFF leader Julius Malema says his party will consider coalition talks with the ANC after the general elections next month - but not with the DA.
News
3 years ago

Malema said when the DA released Solly Msimanga from Tshwane mayor position to focus on his election campaign as Gauteng premier candidate, they didn't have any influence.

"On the other hand, we have the corrupt ANC, which is hellbent on stealing the people's resources. We absolutely don't have a problem like we did in Tshwane now. When they elected the current mayor of Tshwane, we did not get involved. We just folded our arms," the EFF leader said.

"They are going to pass a budget now, we are going to fold our arms. If that municipality collapses, let it collapse. Let the people of Tshwane go to elections and decide what they want. The voter always puts us in a compromised position."