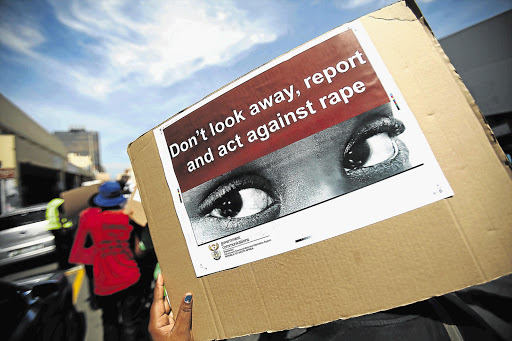 Following TimesLIVE's publication of a story in which a 30-year-old KwaZulu-Natal woman was handed a life sentence for raping her 10-year-old cousin, a string of men have come forward to share how they too were victims of similar crimes.

"Most boys around this age are or were raped by older sisters from their neighbours ... me included ... we kept quiet because we never understood it was a rape," said one man.

A string of other men attested to his claim.

"I was raped by three women who were taking care of me at about age four. I did NOT know anything about sex," said another man.

"I was younger [than the 10-year-old boy] when it happened to me, still I wouldn't call it rape," replied another.

Their names are being withheld to protect their identities.

Clinical director of the Teddy Bear Foundation, Dr Shaheda Omar, agreed with the notion that most of the male victims they spoke to did not see the acts committed against them as criminal.

"Some young boys that we have dealt with have confirmed that they do not see it as sexual abuse.

"This is quite a distorted view," she said.

Omar also said there was no research that would be able to detail how prevalent such cases are but they sometimes ran a programme for young girls who are implicated in sexual crimes in an attempt to tackle these cases from a young age.

"More often than not, you would hear that society says men cannot be raped or violated. It is assumed that the men are always ready for sex so when you are asking about how many of them report such cases, it is next to zero," said Botha.

"They are placed under the carpet for many reasons, including stigma. Some men or boys think, how do I report being violated when society says men must man up and be strong?" he said.

Because of this, men were reluctant, even in their later stages of life, to get assistance.

"Some men would come to me and share how they have been abused but they tend to chicken out when I speak of counselling. The problem is also with the policemen and women who are not trained to receive such cases. There is just no support system among families and communities," he said.

A Free State teacher has taken to social media to share the horror she endured last week after she was allegedly almost raped by a pupil whilst on ...
News
3 years ago

Ten years ago, the department of justice introduced a sexual offenders registry that listed the names of all people, both male and female, who are found guilty of sexually related crimes.

The list, however, is not accessible to the public so it was not immediately clear how many women were on the list.

Advocate Praise Kambula, who is the head of promotion of the rights of vulnerable groups at the department of justice, explained why the list is kept confidential.

"We need to be conscious of the instability of our communities. We are dealing with a society that is angry and is healing.

"We need to consider what would be the consequences for making it public, but we are reviewing the provisions of the National Register for Sex Offenders (NRSO) to see how we can improve its accessibility," she said.

At the moment, a provision exists for employers: hey can fill out a form to check  whether the name of the employee they intend hiring is on the list.

"If you as a person want to open a business that will expose you to children and people with disabilities, you cannot get the licence unless you get the clearance from the NRSO," said Kambula.