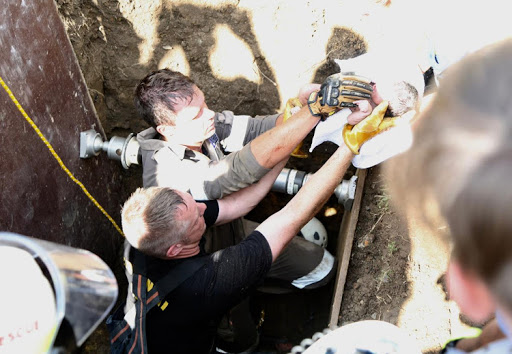 A team of emergency workers battled for four hours to rescue a baby who had been dumped in a stormwater drain.
Image: JACKIE CLAUSEN

Bail conditions have been relaxed for a Durban mother accused of dumping her newborn baby in a stormwater drain.

The 32-year-old‚ who may not be photographed or filmed due to the sensitive nature of the case‚ appeared in the Ntuzuma Magistrate's court on Monday. She is facing a charge of attempted murder following the dramatic four-hour rescue of her baby in February.

Dressed in jeans and a denim shirt‚ the woman‚ who is out on R5‚000 bail‚ walked into the dock amid a packed public gallery.

State prosecutor Stan Miloszewski told magistrate Ravi Pillay that the state was awaiting a statement from one of the rescuers‚ as well as the results of a DNA test. He suggested that a lengthy remand date be imposed to allow for the outstanding evidence to be obtained.

Defence attorney Jaques Botha made a submission for his client's bail conditions to be relaxed. "With the Easter weekend coming up‚ my client has requested that she be allowed to see her children‚" he said.

The state previously ruled that in conjunction with her bail conditions‚ the woman was not to have any interaction with her two other biological children - a 15-year-old son and nine-year-old daughter - without the permission and supervision of a social worker.

Botha further placed on record that his client was being harassed by the father of the child‚ stressing that the court be made aware of this.

Miloszewski had no objections to the accused's bail conditions being relaxed‚ saying the state should be allowed to "show some compassion".

Magistrate Pillay granted the accused's application and said she may have access to her two biological children.

He postponed the matter to July 8 for outstanding evidence.

Baby Sibanisethu ("Our ray of hope")‚ named by the Newlands East community‚ made international headlines when she was plucked from a drain in Newlands East by paramedics.