Thulani Serero on target for Eredivisie side Vitesse Arnhem 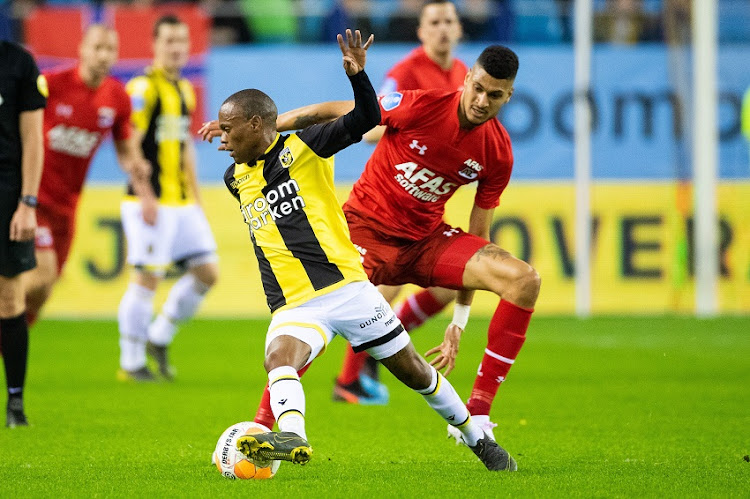 Thulani Serero of Vitesse, Bjorn Maars Johnsen of AZ during the Dutch Eredivisie match between Vitesse Arnhem and AZ Alkmaar at Gelredome on April 02, 2019 in Arnhem, The Netherlands.
Image: VI Images via Getty Images

Bafana Bafana midfielder Thulani Serero gave a timely reminder of his quality on Sunday when he netted a fine individual goal for Dutch Eredivisie side Vitesse Arnhem against title hopefuls PSV Eindhoven.

The match finished in a 3-3 draw to dent PSV’s hopes as Ajax Amsterdam overtook them at the top of the table.

Serero was superb throughout the game and gave his side the lead as he picked up the ball on the right-hand side‚ wrong-footed a few defenders in the box and picked his spot in the bottom corner with a cool finish.

Percy Tau is set to return to action this weekend with Belgian second-tier side Royal Union St-Gilloise after missing their previous game with a ...
Sport
3 years ago

Serero recently returned to the national team and was part of the squad that travelled to Tunisia to face Libya last month but did not play in the game.

His versatility could be a key asset for Bafana Bafana coach Stuart Baxter which‚ coupled with the fact that he has been a regular for his club this season‚ means he is a strong contender for the Africa Cup of Nations squad.

Baxter will be anxious over the workload of star man Percy Tau though as he sat out two matches for Belgian side Royal Union St Gillloise this past week with a foot injury.

The club do not seem too concerned and said the rest was more of a precaution‚ but Tau was expected to play this weekend and didn’t.

Better news is that Bongani Zungu played his first minutes since September 2 when he came on as a late substitute for French Ligue 1 side Amiens in their 2-2 draw with St Etienne.

Zungu has had a frustrating spell on the sidelines but will hope to feature heavily in the remainder of the campaign to prove his fitness for the Nations Cup.

Lebo Mothiba was a late substitute for Ligue 1 Strasbourg as they played to a 2-2 draw with giants Paris St Germain‚ denying the club from the capital the chance to wrap up the league title this weekend.

Kurt Abrahams was on target for his Belgian side Westerlo in their UEFA Europa League play-off fixture with St Truiden‚ while other scorers abroad were Keanu Baccus (Western Sydney Wanderers‚ Australia)‚ Thabo Cele (Cova da Piedade‚ Portugal) and Kyle Jacobs (Queen of the South‚ Scotland).