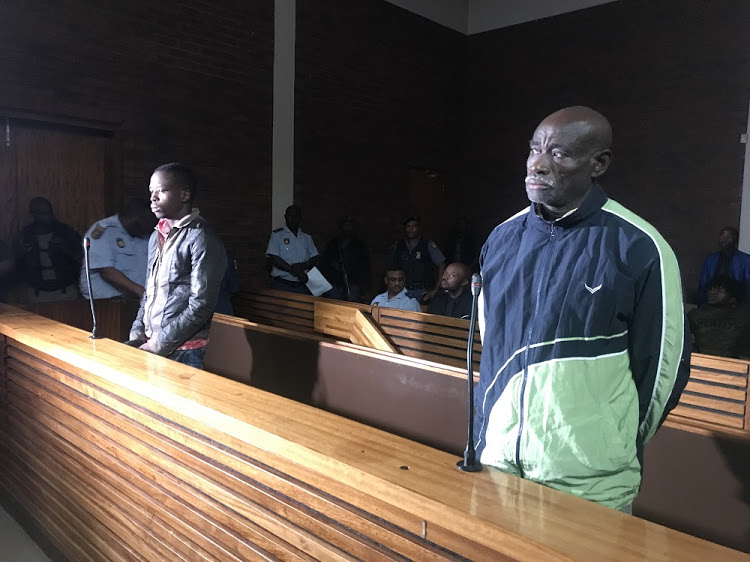 Ernest Mabaso, seen left, and co-accused Fita Khupe were facing of seven counts of murder and theft after they allegedly killed members of the Khoza family in Vlakfontein.
Image: Tankiso Makhetha

The sole surviving suspect in the bludgeoning of seven family members from Vlakfontein, south of Johannesburg, was expected back in the Protea Magistrate’s Court on Tuesday.

Fita Khupe’s case was postponed in February, days after his co-accused Ernest Mabaso was found dead in an apparent suicide in a Cape Town police holding cell.

The 27-year-old had been transported to Cape Town to collect evidence which he had claimed would prove his claims that Khupe was the mastermind behind the killings, despite Mabaso admitting to carrying out the murders.

During his last court appearance Khupe, 61, had continued on his bail bid without Mabaso.

He also tried to get the case against him dismissed on the grounds that the person who had implicated him in the crime was dead, meaning the prosecution would now rely on hearsay evidence of a dead man to prosecute him.

However, magistrate David Mhango was not convinced. Delivering his ruling, Mhango said: "The state's case against Khupe is strong and remains strong.”

The father of the dead Vlakfontein killings murder accused has insisted that his son did not hang himself.
News
3 years ago

He denied Khupe bail. One of his reasons was a likelihood that Khupe, who is a foreign national who now holds South African citizenship, would be killed by the public should he be released.

Mabaso, who had admitted to hitting his victims over the head with a hammer, strangling and raping some of the seven, had infiltrated the now-deceased Khoza family under the guise of being a lost-long relative.

He claimed to have been threatened by Khupe into carrying out the murders and even after his arrest pleaded with the court to keep him separated from Khupe.

Khupe had been in a long-standing relationship with one of the Khoza women who were found murdered and buried under heaps of soil in the family home in October 2018.

Neighbours had reportedly forced Khupe to open the door to the house after being concerned by an unbearable stench coming from the yard.

Khupe's lawyer Gerhard Landman, however, said his client had not been disturbed by the smell - despite sleeping in the same house where the decomposing bodies were hidden. He suggested Khupe's ignorance of the stench could have been masked by the Jeyes Fluid that Mabaso used to clean the house prior to Khupe's return from his home country.

Some of the bodies of the dead family members were discovered in a locked bedroom in the house, while others were found in a locked room outside. Khupe claimed to have no knowledge that they were there. He said he believed that his girlfriend and her family were visiting family in KwaZulu-Natal at the time.