Pressure mounts for Zizi Kodwa to step aside over rape claims 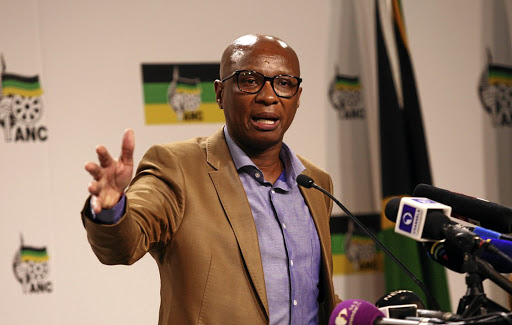 Head of presidency at Luthuli House Zizi Kodwa says allegations by a woman that he raped her are ‘feeble yet dangerous political blackmail and manipulation’.
Image: Masi Losi

Pressure is mounting on ANC head of presidency Zizi Kodwa to step down after a 28-year-old woman accused him of rape.

Kodwa , whose position effectively makes him President Cyril Ramaphosa’s eyes and ears at Luthuli House, has dismissed the allegations as “feeble yet dangerous political blackmail and manipulation”.

The scandal is a major blow for Luthuli House as it comes just months before elections and just when it is still reeling from a sexual harassment charge laid against its national spokesperson Pule Mabe.

Mabe returned to work last week after he was cleared by an internal party panel.

An ANC heavyweight is being accused by a Joburg woman of drugging and raping her.
News
2 years ago

During Mabe’s leave of absence from duty as a result of his case, Kodwa was appointed as the party’s spokesperson.

Sowetan’s sister publication Sunday World yesterday reported on the contents of a letter shared with the ANC’s leadership detailing the alleged attack.

According to the letter which Sowetan has seen the woman, who cannot be named, claimed she was raped while visiting her then friend She said she had spent the night there after having a few drinks and only interacted with Kodwa the next morning.

The woman was allegedly raped at a Michelangelo apartment in Sandton used by Papa Leshabane.

Leshabane, who is close to Kodwa , was one of the executives at controversial firm Bosasa.

Used condoms and your blue underwear were on the floor

The woman alleged that Kodwa made advances towards her but she turned him down.

He then allegedly insisted on her having a glass of champagne with him. She then insinuated in her letter that her drink may have been spiked.

“My friend and I started feeling dizzy and we decided to take a nap. We woke up feeling unnaturally aroused; we are kissing and touching each other inappropriately, something we’ve never done.”

The woman said she recalled waking up to three men bragging: “it was going down here”.

“There were used condoms and your [ Kodwa ’s] blue underwear on the floor,” she said in the letter.

Kodwa released a statement yesterday dismissing the allegations. “I deny these accusations with the contempt they deserve. I refuse to succumb to extortion and blackmail,” said Kodwa .

He said he was consulting with his lawyers with the view of opening a case of extortion.

The ANC's Zizi Kodwa has denied rape allegations leveled against him. Kodwa is accused of raping a woman at a function in April 2017. In a statement ...
News
2 years ago

Leshabane confirmed knowing both Kodwa and his accuser but distanced himself from the incident.

“When the alleged incident took place, I was not there,” said Leshabane yesterday.

Leshabane added: “I do not want to get involved in stuff like that.”

The ANC Women’s League (ANCWL) released a statement declaring its support for Kodwa ’s rape accuser. It demanded that Kodwa be suspended.

ANCWL secretary-general Meokgo Matuba said: “Whilst we take into account the principle of innocent until proven guilty, the ANCWL is resolute in supporting the victims of sexual harassment and rape.

“The ANC must engage the SAPS to find out if there is any case reported against Cde Zizi and consider suspending him from all ANC duties with immediate effect,” Matuba said. The ANCWL was also joined by the party’s young women’s desk, which called on Kodwa to step down.

ANC young women’s desk convenor Precious Banda said in a radio interview that they believed Kodwa must step down.

The ANC’s Dakota Legoete said they had advised the complainant to approach police.

“The best thing for her is to approach the law enforcement agencies to make sure that this matter is properly processed within the rule of law,” said Legoete.

The woman also claimed in her letter that there had been an offer for a R20,000 and R50,000 settlement, which she refused.

“Beyond the shame, pain and humiliation that we have gone through, we were stripped of our pride, dignity and worst of all, our reputation,” she said.

Sowetan has also seen an alleged text message from Leshabane saying to the woman: “I see your story is making rounds in political circles. Thought I wanted to keep ur dignity intact. U [sic] doing very well. Careful u don’t become a political football. Take care.”

The woman who accused ANC spokesperson Pule Mabe of sexual harassment is now back at work, but it's unclear in which department she has been ...
News
2 years ago

Sexual harassment case against spokesperson riddled with material errors of law.
Opinion
2 years ago
Next Article