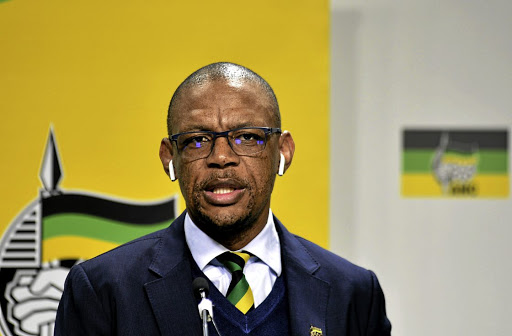 ANC spokesperson Pule Mabe has been cleared of any wrongdoing by the party's grievance panel in a case of sexual harassment brought by a colleague.
Image: Lucky Morajane/Gallo Images

The woman who accused ANC spokesperson Pule Mabe of sexual harassment is unhappy with him being cleared of any wrongdoing.

Speaking publicly for the first time since the alleged incident, the woman told Sowetan that the matter was not closed as she was disgruntled with how the grievance panel handled it.

"I'm definitely not happy, but I will give you more material for you to understand why I'm not happy. I can't say I am fine, but I am taking it one day at a time," she said.

Mabe was reinstated into his position this week after the panel led by former Cosatu president Sdumo Dlamini and ANC national executive committee member Thoko Didiza cleared him.

Without revealing the details about how she intended to challenge the matter, the victim said she was not satisfied with the panel's findings.

When asked if the matter was closed, the woman responded: "No, no, it's not, it can never be."

Sowetan has learnt that the victim will be meeting with ANC human resources officials today to finalise her redeployment to a different department within the ruling party structures.

Yesterday, Mabe's accuser was also meant to meet with her ANC Youth League Greater Alexandra branch, where a way forward was to be discussed.

She alleged that Mabe had made advances on her, slashed her salary, demoted and emotionally abused her after she rebuffed his sexual advances on at least two occasions.

In the letter, the 26-year-old alleged that Mabe booked a room for her close to his at the Saint George Hotel in Irene, southeast of Pretoria, under the pretence that the two would be doing ANC work.

She said on the first night, Mabe came to work in her room and at some point asked her to sit closer to him. She claimed that on the second night, Mabe insisted on working on his assignment in her room, saying he would fall asleep were he to do so alone.

She detailed how during one of the occasions Mabe climbed into her bed while she was asleep and got under the blankets, putting his legs on top of hers.

In his responding affidavit presented to the panel, Mabe said he reduced the salary of his accuser because she made "fraudulent misrepresentations" about her qualifications.

In a statement this week, the party indicated that the matter was now closed.

ANC spokesperson Pule Mabe was cleared of sexual harassment charges after the ruling party's grievance panel ruled there was no evidence against ...
Opinion
2 years ago

The grievance panel has recommended that the ANC develop a harassment policy in three months and that no meetings should take place in staff members' bedrooms, among other things.

The national convenor of the ANC Women's League young women's desk, Precious Banda, said they were disappointed that to date, the party didn't have a policy on sexual harassment.

Approached for comment yesterday, Mabe said he would only resume his duties today and referred all enquiries back to acting spokespeople Zizi Kodwa and Dakota Legoete.

Attempts to reach Legoete drew a blank while Kodwa referred us back to Mabe.

"I am no longer the acting spokesperson of the ANC, usomlomo [the spokesperson] is fully back at work," said Kodwa.