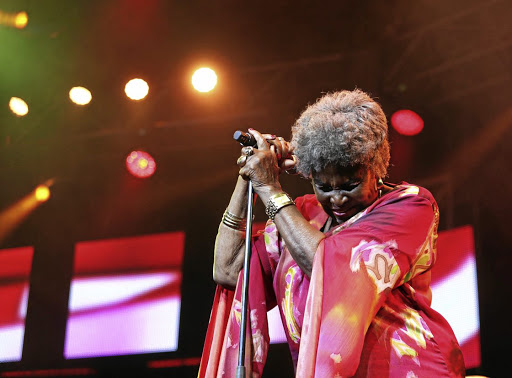 Legendary Kofifi-jazz musician Dorothy Masuka's bizarre wish was to die on stage but when she took her last breath on Saturday she was with her family at home.

Masuka, 83, always said she would never quit singing, and her wish was almost granted to her when she became sick while touring overseas.

The singer and composer behind some of the biggest hits of the 1950s and '60s died due to complications related to hypertension after suffering a mild stroke last year.

Gallo Records general manager Rob Cowling said: "Such sad news today learning of the passing of Mam D. She was such a special lady and one of our dearest recording artists. Condolences to the family," Cowling said.

When Sowetan visited her son's house in Mulberton, south of Johannesburg yesterday, four cars were parked outside while inside close family members that included her daughters were having a meeting. The family asked for privacy.

Inside the yard, industry people like promoter Morris Rhoda and the late Miriam Makeba's grandson Lumumba Lee were busy erecting a tent.

Masuka, who was also affectionately known as Mama D, was born in Bulawayo, Zimbabwe, and her family moved to SA when she was 12 due to her health.

Dorothy Masuka died at her Johannesburg home surrounded by family.
News
3 years ago

Masuka was hailed as one of the country greatest song composers and producers, having penned smash hits that made Makeba famous.

Generations: The Legacy executive producer Mfundi Vundla, who secured rights to capture the legend's story through film, defined Masuka as a beautiful, wonderful and warm human being.

He explained that Masuka was at the forefront of the foundation of urban pop culture with the likes of Dolly Rathebe, Makeba and Abigail Kubheka.

By the time Masuka went into exile during apartheid, she was already an established and prominent singer, composer and producer, said Vundla.

"At the same time, there was a renaissance in African popular urban music. She was a major cultural figure of that period. She is one of the founders of urban popular music, which I see as a big contribution to African music in general."

Vundla explained how her famous hit song, Hamba Nontsokolo, was composed while Masuka was on a train ride to Zimbabwe.

Her LP, titled Ingalo, was released in 1981 and it was followed by many more.

Music legend Sipho "Hotstix" Mabuse, who grew up listening to Masuka, Makeba and The Skylines, said the legendary singer deserved to be celebrated.

"We need to celebrate the legacy she has left behind. As much as we would like to hold on to our people but there is a time that we need to let them go," Mabuse said.

"If you looking at singers of that era you will see that she was ahead of her time."

Masuka released her last album in December , titled Nginje, and it has songs such as Yombela Yombela, Mzilikazi, Mandela, Nontsokolo and Musango.

For her contribution to music she received the Standard Bank Sama Lifetime Achievement Award in 2001.