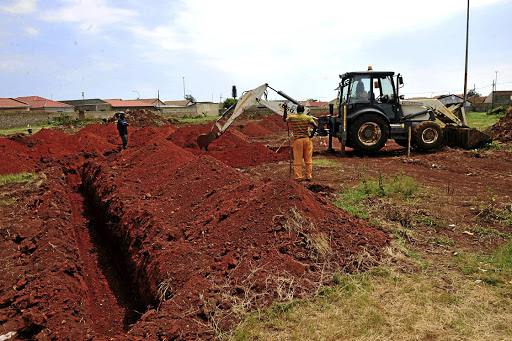 The stand in Dobsonville, Soweto, that is at the centre of a dispute between a developer and residents who had previously used it for food gardening.
Image: Veli Nhlapo

The destruction of a community vegetable garden to make way for housing in Dobsonville, Soweto, has pitted locals against a developer in an ugly fight.

Mafika obtained an interdict in the South Gauteng High Court against a group of residents who claim to have been given permission by a ward councillor to use the land.

Mafika said he purchased the land for development.

"I have a title deed. I don't know why they are fighting me and my partners.

"I won the case in the high court after the community was given the chance to present documentation to prove ownership [of the land]," the co-owner of Mafika Township Trading said.

His business partner Isaac Mgqibisa told Sowetan they were in the process of building 21 houses on the land.

"The people here had denied us access to the land for over three years, going to the extent of manhandling us and threatening us, claiming that we are taking their land," Mgqibisa said.

"We had to engage the City of Johannesburg to address this issue because we are now fearing for our lives."

Community members said they were betrayed by the councillor.

Sibusiso Khumalo, a resident who took part in the agricultural project on the piece of land, said they had been running a vegetable garden on the plot since 2008.

"We were able to beat poverty and plant vegetables and fruit that we distributed among ourselves, orphans and the elderly in the area," Khumalo said.

Another resident, who did not want to be named, claimed they had planted more than 30 fruit trees which were since cleared by the developer, allegedly without prior warning.

"What breaks my heart is being kicked out of the place without any engagement after 10 years of labour.

" I was able to feed my family through this project but now it is taken away," said the resident.

On Sowetan last visit on Monday, work on the land had resumed after police had intervened on behalf of the developer, as per the court order.

Dobsonville police did not comment on their role in the matter, as Sowetan calls to seek comment were not attended to.

Meanwhile, two security guards were also posted on site to safeguard equipment and to respond to any threat to the workers by the community.