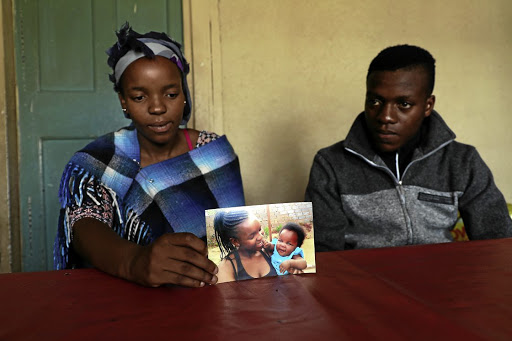 Zanele Ngwenya holds a photo of her baby Mbalenhle Ngwenya, who was murdered in Duduza, Ekurhuleni. With her is Morena Molakeng, the father of the baby.
Image: SANDILE NDLOVU

A wailing seven-month-old baby was bludgeoned to death with a garden hoe by the boyfriend of a neighbour who was looking after her.

The 49-year-old man who attacked baby Mbalenhle Ngwenya later told police that he had killed her after she cried endlessly because she was "possessed by demons".

The incident occurred in Duduza, Ekurhuleni, on Sunday minutes after the man's girlfriend had walked out of the room, leaving him with the baby, as she went to the kitchen to get a container to give the infant juice.

When she returned she found the baby she had left on the couch bleeding on the floor with a gash in the head.

Police spokesperson Sergeant Harry Manaka said when the woman walked back into the room her boyfriend was in possession of the garden hoe.

"The baby was motionless. She sustained an open wound to the head and injuries to the body," Manaka said.

Manaka said when the man was arrested he told officers he had killed the baby while she was crying because she was "possessed by demons".

They left baby to die in microwave
News
2 years ago

He was arrested at the scene and will soon appear in court on a murder charge.

The man's girlfriend is a friend and neighbour of the infant's paternal grandmother, Ntombizodwa Molakeng, and she had just taken Mbalenhle from her at a nearby shebeen. She said she took her home to give her something to drink as she believed the baby was hungry.

Molakeng had fetched the infant from her mother, in another section of the township, on Saturday.

The mother, 17-year-old Zanele Ngwenya, told Sowetan she had handed over her baby as Molakeng had taken her before and returned her safely.

A sobbing Zanele said she was devastated by her daughter's death and was still trying to come to terms with it. 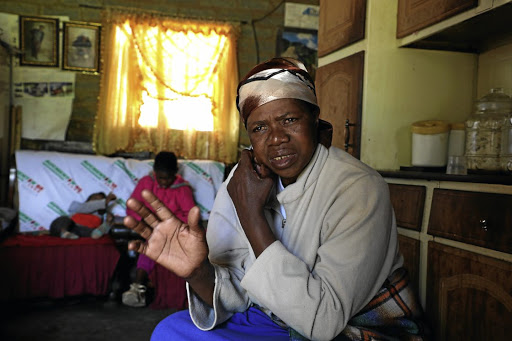 Ntombizodwa Molakeng, 55, had taken her granddaughter Mbalenhle Ngwenya to a local shebeen.

"Today when I went to the mortuary to identify her body, I saw she had a big cut on the side of her head and her brains had popped out through her nostrils."

Zanele said what hurt the most on Sunday was that she learnt of her daughter's death on social media.

"What pains me the most is that I only found out in the evening when my child died around 2pm on Sunday," said the teenage mother.

She said it would take her a very long time to forgive her boyfriend's mother as she did not know she was taking the baby to shebeens.

Her boyfriend, Morena Molakeng, 20, said he was in Namibia, where he works, at the time of his daughter's death.

"I got the news from my girlfriend. I was in shock and disbelief until I arrived here to confirm the news.

"What hurts the most right now is the circumstances around my daughter's death. She was my first born ... just when I was enjoying fatherhood, I lost her."

Visiting the family yesterday, MEC for community safety Sizakele Nkosi-
Malobane said: "I strongly condemn the actions of the grandmother for removing the child from the safe haven of her home and taking her to a shebeen and exposing her to danger.

"However, we will ensure that the perpetrator is brought to justice and we have prioritised the investigation of the matter," she said.

Nkosi-Malobane also said the police would investigate a case of child neglect.