'I could kill my brother for raping my daughter' 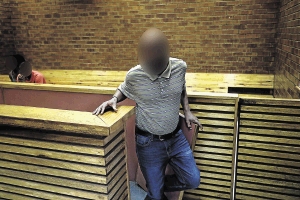 This 47-year-old man was sentenced to life in the Protea magistrate's court, Soweto, for raping his niece when she was nine years old. His face is concealed to protect the victim's identity.
Image: Thulani Mbele

A 47-year-old man has been sentenced to life imprisonment by the Protea magistrate's court for raping his niece, who was nine years old at the time.

The man raped his niece in May 2017, while sharing a bed with her. He had been offered shelter by his younger sister as he was having marital problems.

Magistrate Audrey Mpofu yesterday said she was convinced by evidence presented against him and sentenced him to life imprisonment without an option for parole.

"Nothing compels me to give you a smaller sentence. I have heard all evidence and witnesses in this case which is why I have no doubt in my mind that this child was raped," Mpofu said.

"Rape has become a trend in South Africa and sadly it has spiralled out of control, therefore the justice system has decided to impose harsher sentences to those who commit such a crime."

A man who terrorised Tembisa and Ivory Park with his seven-month rape and robbery spree has been handed 20 life sentences by the high court in ...
News
3 years ago

Mpofu said a qualified doctor with multiple qualifications including a forensic medical diploma from the University of Free State presented evidence that convinced the court the child was raped repeatedly.

"The doctor stated that the child's hymen was destroyed and that tissue surrounding it in the genital area was destroyed due to penetration."

Mpofu said the child also gave solid testimony and told the court how she was raped on different occasions by her uncle. "The child could even remember the different kinds of pyjamas the uncle wore on both occasions which the accused could not deny."

Mpofu said the man showed no remorse because he laughed out loud when the child gave testimony.

"I therefore find you guilty of two counts of rape and give you a life sentence."

Prosecutor Edward Madibela had argued for a harsh sentence, saying the man betrayed the family which had taken him in after he had marital problems with his wife. He said the man was homeless at the time and the victim's mother, who is his younger sister, offered him shelter. His sister was staying in a two-bedroom house with her daughter's father. They allowed him to share a room with their daughter.

Madibela said the child told the court during her testimony that her uncle took off his pyjamas on one of the nights and forced her to also undress and then raped her. "He forced her to lie on the bed facing up ... and penetrated her."

Tembisa rapist pursuing religious study in prison, but has no remorse

The sentencing proceedings of serial rapist Joseph Rasempane Mahloma have begun with a probation officer’s report asking the court to make sure he ...
News
3 years ago

Madibela said the victim also told the court that her uncle had covered her mouth with his hands so that she could not scream.

The victim's mother said in court ahead of the sentencing: "I would give him a death penalty and have him hang."

She said her child had now become a bully and was a difficult child who no longer takes instructions and they don't even talk much.

"I don't know what led my brother to rape and destroy my child's future like this."

She also told the court that she had loved her brother and trusted him wholeheartedly.

"I bought him everything; underwear, clothes and even alcohol."

She pleaded with the court to give him a harsh sentence or she would kill him with her bare hands.