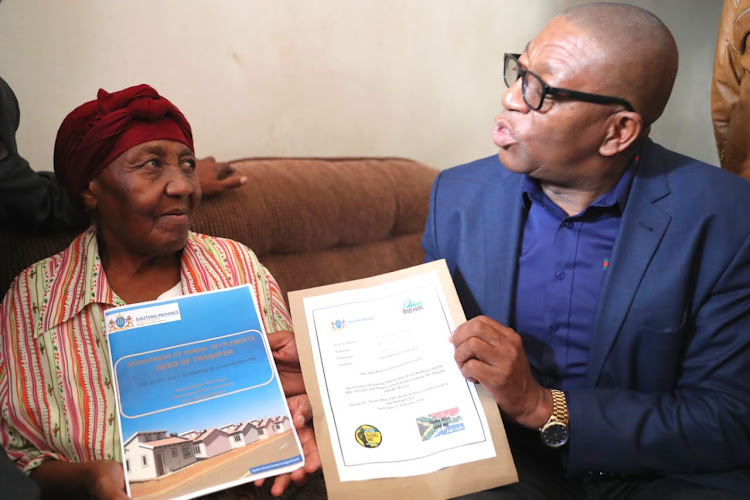 A 77-year-old woman has got her happy ending after years of waiting to be a rightful owner of her home.

Lydia Sealanyane from Savanna City in Sedibeng, south of Johannesburg, was one of more than 1,300 beneficiaries who received title deeds on Friday from the Gauteng human settlements department's mega development project.

The rollout of title deeds since last year has been reaching out to different townships in South Africa to ensure homeowners have their legal documents as the rightful owners of homes and stands.

Expressing her gratitude, Sealanyane said she was happy to get her documents while she’s still alive.

Properties were expropriated by apartheid regime.
News
2 years ago

“Many people died in shack fires before getting their houses. I am very fortunate to get my house and very quickly get my title deed. I never thought that life would be so nice while I was still staying in Everton informal settlements,” said Sealanyane.

MEC for human settlements Uhuru Moila visited Sealanyane where the title deed was delivered to her in the comfort of her own home.

Speaking at Savanna City at the title deeds handover ceremony, Moiloa said the issuing of title deeds forms part of the government’s programme called “Title Deeds Friday”, as pronounced by Gauteng premier David Makhura, to restore the dignity of the previously disadvantaged by giving them proof of ownership.

Moiloa said: “The apartheid regime denied black people a chance to own land and properties; that is the reason this government is giving black people a right to a house and land ownership.”

He also told the beneficiaries that a title deed would ensure that no one can come and claim their stands or houses; it is proof of ownership to their properties.

“As we walk this journey to develop communities, mistakes will happen, but that does not mean we must forget where we come from. The land of our forefathers was forcefully taken by the apartheid regime. Today we are allocating title deeds to give you security of tenure and a life-time investment,” said Moiloa.

The MEC told residents he was aware that Savanna City had not yet been electrified but that he was going to ensure an immediate electrification of the township which is the responsibility of the Midvaal local municipality.

The City of Johannesburg will for the next two weeks be handing over more than 600 title deeds to some of the destitute residents in the city.
News
3 years ago
Next Article