Savings and passion help Khumalo become his own boss 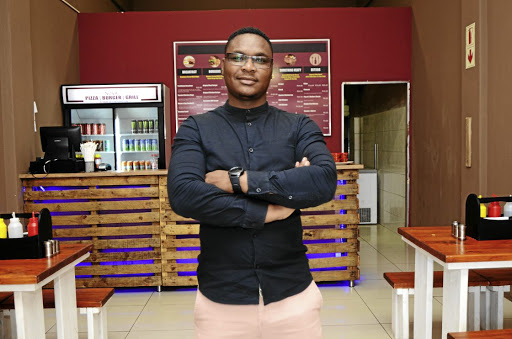 Thamsanqa Khumalo is the owner of Cafe Villa Nova in Benoni on the East Rand./Mduduzi Ndzingi

Thamsanqa Khumalo has realised his dream of becoming a restaurateur 10 years after he started saving for it.

Khumalo, 32, from Benoni on the East Rand was working as a waiter when he first dreamt of running his own restaurant.

His dream came true last year when he opened Café Villa Nova in the Benoni CBD.

Khumalo, who grew up in Siyabuswa in Mpumalanga, told Sowetan his journey was not so rosy despite his name meaning "luck". He had to go look for work when he could not further his studies after matric. He found a job as a waiter.

"I was raised by my grandmother because my mom was out working to feed us. Things were hard and I remember we got supported by child welfare," Khumalo said.

"I feel like I missed out on my childhood because I had to start working at a very young age just to assist at home because we were very poor."

Khumalo said he did all sorts of odd jobs to save up for his dream.

"I knew straight after school that the only way I would make a decent income is if I become my own boss."

His first job as a waiter was at an Italian restaurant that further ignited his passion for food.

"I enjoyed serving customers and bringing out food from the kitchen. It gave me an idea that I would one day own a restaurant," he said.

Khumalo ended up working for an IT company doing admin before he could embark on his own venture.

"I then got retrenched in 2016 and took my 10-year long savings and pension fund which amounted to R280,000 and opened my business," said Khumalo.

"With the support of my friend Louis Makopo, who invested in my business as a silent partner, I was able to push marketing and advertising for my brand.

Makopo, who works as an IT specialist, told Sowetan he had been friends with Khumalo for a while.

"When he told me his dream I bought into the idea and helped because of the passion I saw in him. I believe in black-owned businesses and he has made it with his determination," Makopo said.

Khumalo said his wife had been his pillar of support to his dream and thanks her for the restaurant's early success.

When Sowetan visited the restaurant yesterday, it was packed with customers.

Khumalo now employs 10 people among them is his older brother Nkosinathi, who is a professional chef.

Although Khumalo could not further his studies he said he wanted to make sure his children would be educated.