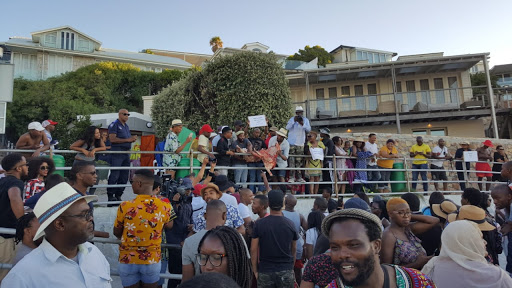 People protested at Clifton Beach after security guards allegedly escorted members of the public from the beach.
Image: Dan Meyer

A director of Professional Protection Alternatives (PPA)‚ three security officers and the security company as a legal entity are facing charges of violating the security industry’s code of conduct after beachgoers were allegedly removed from Clifton’s Fourth Beach.

Psira is one of the bodies appearing in a parliamentary inquiry into an incident in December where people were allegedly escorted from the beach by the private security company.

Chauke would not go into the details of the code of conduct charges saying the merits of the case were sub judice. A hearing is set down for March 4.

Parliament will hold an all-day inquiry into what transpired at Clifton Fourth Beach in Cape Town.
News
3 years ago

Chauke said in terms of the code of conduct for security officers‚ anyone found guilty of improper conduct was subject to the following penalties:

A warning or reprimand The suspension of registration as a security service provider Withdrawal of registration as security service provider A fine not exceeding R1m; Publication of appropriate details of the conviction of improper conduct and any penalty imposed. Chauke said Psira had received four complaints about the Clifton incident related to the conduct of PPA. There were allegations of assault‚ unauthorised restraints and use of abusive language.

The regulatory body said it had started an investigation on December 27 and several witnesses and PPA staff had been consulted and interviewed.

PSiRA announced on Monday it will institute an investigation into the role played by a private security company in removing people from a beach in ...
News
3 years ago

For the first time, the head of the security company at the centre of the Clifton beach race row has given his version of events.
News
3 years ago

As we head into elections, and politicians will focus on our differences for gain, ours is to see through the lies
Opinion
3 years ago

Clifton all sun, sand and sizzle as beachgoers chill - for now

Things were back to normal at Clifton Fourth Beach on Monday with many beachgoers looking unperturbed by potential disruptions after days of protests ...
News
3 years ago
Next Article