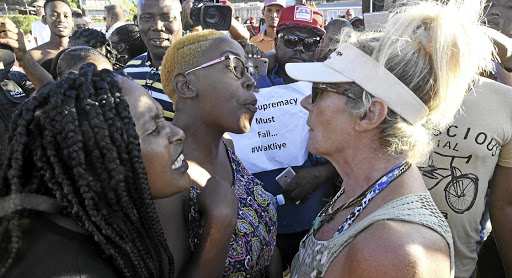 Incidents such as the racial confrontation at a Clifton beach that saw a sheep slaughtered as part of a ceremony to end "racism" at that beach will get worse as elections near./Brenton Geach/Gallo Images

"Why was it Sanjay and not Mohammed?" asked the Muslim father of the bride as his daughter and her fiancé sat on the brightly decorated stage minutes away from being married.

What we were witnessing last week was one of those taken-for-granted wonderworks of SA - an interfaith marriage in a world divided by faith, culture, class, caste and custom. In other homes, a Hindu-Muslim wedding would cause great conflict; in some countries where religious fundamentalism is rife, the couple could find themselves in mortal danger.

The father's speech was carefully ordered. Even in this most tolerant of religious communities, Cape Town, the father knew he had to make a public case for his Muslim daughter marrying a Hindu man.

In one of the best speeches about interfaith community I have ever heard, the father spoke not about the elaborate symbols and sacraments of their ancient faiths, but about what he observed about the shared values of the couple - care, compassion, trust, commitment, respect and responsibility.

These values transcended the outward differences of religious observance and bound the two young people together in bonds of love that were deep, enduring and universal.

In this union, a lingering apartheid myth was destroyed, namely, that when we as human beings come together across our social or cultural or racial differences, then something is lost. The Hindu-Muslim wedding shows exactly the opposite - everybody gains.

The one partner does not become less Muslim or the other less Hindu; both become more human based on the embrace of common values that in fact strengthen their individual religious identities.

Pandemonium broke out on Clifton's Fourth Beach on Friday demonstrators arrived with a sheep which they slaughtered to exorcise the "demon of racism".
News
3 years ago

None of this was easily achieved. There were difficult negotiations between the Muslim and Hindu families. The ceremony, it was agreed, would include Muslim as well as Hindu wedding traditions.

The Imam performed the Duah (Muslim prayers) and the Hindu priest took the couple through a dazzling display of rituals including walking around an on-stage fire four times and then through seven steps before confirming the marriage. Indian dancing was preceded by traditional Muslim wedding songs. A Christian minister was asked to offer a prayer for the newly married Hindu-Muslim couple.

As we approach the elections, our politics are going to become even more divisive as politicians milk our supposed differences for political gain.

The sheep-slaughtering spectacle on one of Clifton's beaches was in large part about parties manoeuvring for political advantage in a province that remains moderate in its electoral choices. We are leaders in the politics of the spectacle and no, actions such as slitting a sheep's throat in public are not instruments of the powerless to draw attention to their marginalisation.

The primary arena for the South African spectacle is parliament and these are hardly marginalised victims of society.

The sheep-slaughtering spectacle on one of Clifton's beaches was in large part about parties manoeuvring for political advantage in a province that remains moderate in its electoral choices.

And so with the spectacle, as at Clifton, the one party must "out-race" and "out-black" the other in a show of opportunism that does nothing to dismantle the inequalities of race and class. It is going to get worse as we head to the elections. Indian, Coloured, White, African - all these apartheid-legislated racial identities - will come under attack in the next few months.

Which is why this beautiful Hindu-Muslim union at the end of 2018 gives me so much hope. These two young people have committed themselves to a life of service, the one a teacher, the other a doctor.

They represent the majority of South African youth - those who desire the unity of lives and purpose as we tackle problems of education, health and more. As the couples discovered, achieving that is not easy. As the father of the bride realised, moving communities in the direction of unity is as much an educational act as it is an act of social courage.

This wedding offers a powerful counter-narrative to the divisiveness of our politics. Such stories not only inspire hope; they counter the lie that we cannot rebuild our country, together.