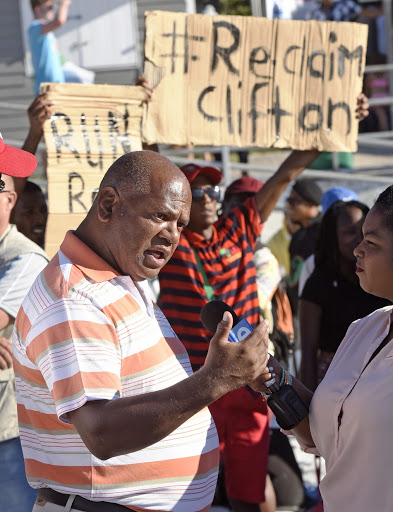 Cape Town mayor Dan Plato on Fourth Beach in Clifton during the "cleansing ceremony" on Friday December 28, 2018, at which a sheep was slaughtered.
Image: Gallo Images/Brenton Geach

Parliament will hold an all-day inquiry into what transpired at Clifton Fourth Beach in Cape Town‚ where beachgoers were allegedly escorted off the beach by a private security company.

The incident was deemed racist by a number of organisations and compared to apartheid-era beach bans. In the wake of the incident‚ a number of protests took place‚ including the slaughtering of a sheep at the beach “to exorcise the demon of racism”.

A parliamentary programme published on Wednesday shows that the portfolio committee on environmental affairs has scheduled an inquiry “into the alleged closing off of Clifton Fourth Beach to members of the public” for Monday next week.

Representatives of the department of environmental affairs‚ the City of Cape Town‚ Professional Protection Alternatives (PPA) Security - the company at the centre of the controversy‚ the police and the Private Security Industry Regulatory Authority (PSIRA) will all be invited to Monday’s meeting.

Shortly after the incident‚ the parliamentary committee said it was appalled by what happened and condemned “the restriction of access and the removal of black people” from the beach.

“The ICM Act states clearly that the intention of coastal public property is to prevent exclusive use of the coast by facilitating access to and sustainable use of the productive coastal resources for the benefit of all South Africans‚” he said.

PSiRA announced on Monday it will institute an investigation into the role played by a private security company in removing people from a beach in ...
News
3 years ago

Mapulane said the act also made it clear that it was the duty of the state as the trustee to ensure that coastal public property is used‚ managed‚ protected‚ conserved and enhanced in the interest of the whole community‚ as opposed to only a few individuals or groups.

“Therefore‚ no security company has the right to restrict or remove people from a public beach‚” he added.

The City of Cape Town announced that it would be laying a complaint with PSIRA against PPA Security.

Regarding the slaughtering of a sheep on the beach‚ the city said it would be serving a notice on the protest organiser as the act was performed in contravention of the city’s by-laws.

For the first time, the head of the security company at the centre of the Clifton beach race row has given his version of events.
News
3 years ago

As we head into elections, and politicians will focus on our differences for gain, ours is to see through the lies
Opinion
3 years ago

Clifton all sun, sand and sizzle as beachgoers chill - for now

Things were back to normal at Clifton Fourth Beach on Monday with many beachgoers looking unperturbed by potential disruptions after days of protests ...
News
3 years ago

'One EFF, one bullet' tweet was fake, says BLF member

Black First Land First (BLF) member Zimasa Mpemnyama has distanced herself from a series of “manufactured” tweets – in her name – lashing out at the ...
News
3 years ago
Next Article