I have forgiven Zuma - Malema 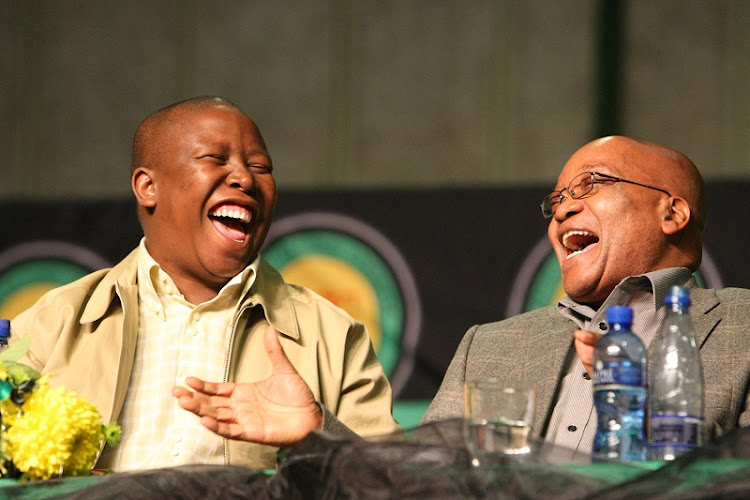 The good old times: Julius Malema, who has previously referred to former President Jacob Zuma as "Duduzane's father" in parliament instead of as "president", says all is forgiven.
Image: SYDNEY SESHIBEDI.

The red berets leader told congregants of Apostolic Faith Mission River of Life in Soshanguve, Tshwane, on Sunday, that coming to church was a sign that he and Zuma needed to put their differences aside for the sake of peace.

"We came here for wisdom and since the priest was telling us about forgiveness as politicians, we must now forgive Zuma. We forgive him for the sake of the priest because we cannot go against the word of the priest," said Malema.

He said for that reason, they would forgive Zuma and move forward with their lives.

Malema and Zuma's relationship took a toll after he was expelled from the ANC Youth League in 2012.

He also said Ramaphosa must act against ANC members implicated in Bosasa's network of corruption.
News
3 years ago

Zuma and the EFF leader also exchanged blows in parliament during Zuma's tenure as the country's president, with EFF MPs asking  him to "pay back the money" when former public protector Thuli Madonsela's report on Nkandla showed Zuma benefited unduly from security upgrades to his KwaZulu-Natal home.

Malema and his MPs previously refused to call Zuma "president" in parliament and referred to him as "Duduzane's father" instead.

Turning to elections, Malema asked the church for prayers and no bloodshed.

"We asked the church to pray for peaceful elections and that there shouldn't be a drop of blood because of the elections. People have the right to choose the government of their choice without any form of intimidation."

The EFF will host its manifesto launch rally in Soshanguve on Saturday at the Giant Stadium.