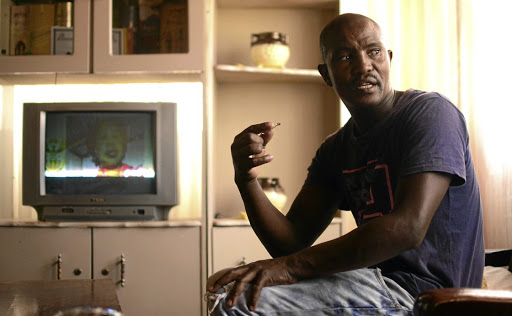 Bonakele Pakisi,a witness in the killing of teen Matlhomola Mosweu, says three men broke into his home in Coligny and threatened to kill him.
Image: Tiro Ramatlhatse

A North West man who witnessed the killing of Matlhomola Mosweu in Coligny in the North West nearly two years ago is living in fear after he was allegedly attacked by unknown men.

Pakisi told Sowetan three men broke into his house and told him they had come to deal with him "because things were different in Coligny because of him".

The spotlight fell on Pakisi in April 2017 after he went to the police and told them that he saw two farmworkers, Pieter Doorewaard and Phillip Schutte, assault 16-year-old Mosweu to death. Pakisi was removed from police witness protection in August following his testimony in the case.

The small farming town was brought to a standstill with shops belonging to whites been set alight as a result of Mosweu's killing.

Doorewaard and Schutte were convicted in October and will be sentenced in two weeks' time.

Pakisi said ever since judge Ronald Hendricks handed down his judgment, his life has been made "a living hell".

He said he was barred from all white-owned shops in Coligny.

The North West high court has declined to hear the application by two farm workers convicted for killing a teenager in Coligny to be released on ...
News
3 years ago

"I always have to send someone to the shops because they [shop owners] made it clear that I was not welcome in their shops because I testified against Doorewaard and Schutte," he said.

Pakisi said while trying to adjust and learn to live with those conditions, he was attacked.

He said his assailants came to his house and asked him questions about the murder case. He said they then asked him whether he realised that he had caused huge tension between whites and blacks in the area.

"Before I could even finish talking, they were all over me. They kicked me on my body for a while and threatened to kill me," he said.

Pakisi said one of the men then ordered the other to shoot him.

"[But] he could not pull the trigger. They then left."

He immediately reported the incident to the police, which led to the arrest of the three men on Saturday. He said police released them on the same day.

On Monday, he came across the same men and they threatened him with knives.

"They said they were going to finish me off," he said.

Police patrolled around Pakisi's home on Monday night for his safety.

Pakisi said he did not have a chance to ask his attackers who had sent them.

"The torture I went through that day is still continuing even today. People want to see me dead for reporting a crime," Pakisi said.

Tselanyane, however, said the alleged intimidation on Pakisi cannot be linked with the Coligny sunflower case as they were fighting over a girl.

He said the three were released on warning and will be back in court on January 21.