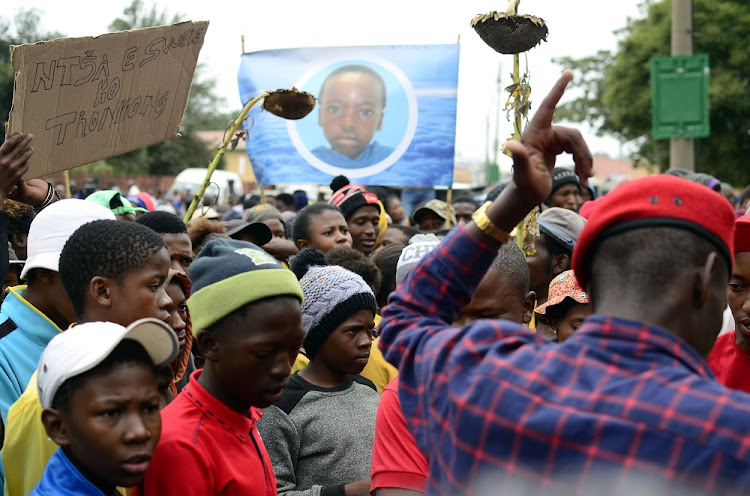 Matlhomola Jonas 'Faki' Mosoeu's murderers Phillip Schutte and Pieter Doorewaard told the North West High Court in Mahikeng through their legal representatives they wanted to exercise their rights not to be in custody until they were sentenced.
Image: Tiro Ramatlhatse/ Sowetan

Two Coligny farm workers found guilty of killing a 16-year-old Matlhomola Mosweu have approached the court seeking to be released on bail pending their sentence.

On Friday, the legal representatives of Phillip Schutte and Pieter Doorewaard told the North West High Court in Mahikeng they wanted to exercise their rights not to be in custody until they were sentenced.

Schutte and Doorewaard were convicted in October 17 by judge Ronald Hendricks for killing Mosweu in April 2017 after accusing him of stealing sunflower heads.

National Prosecuting Authority spokesperson Thembeka Mbadu said: “The Judge will give the ruling whether  their application was procedurally correct or dismissed them if found non-procedural.”

They were charged with murder, intimidation, theft, pointing of a firearm and kidnapping.
News
3 years ago

She said the defence’s application was not something common.

“As soon as the judge says I found you guilty, that bail falls off. You can no longer be on bail; that is why they were taken into custody."

She said the pair can however appeal and apply for bail to be extended after they have been sentenced.

The judgment has been reserved until the state submitted recent heads of argument. During the last court sitting, Hendricks postponed the case to January 28 to allow the defence to prepare for mitigation.