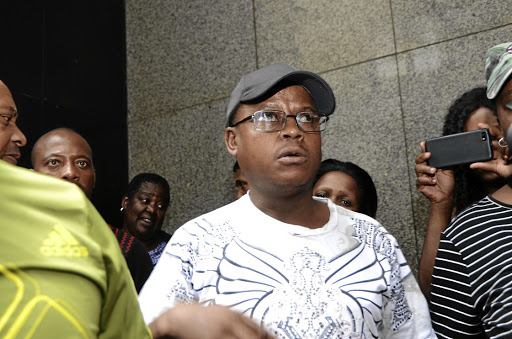 Families of the victims of Life Esidimeni gather at Luthuli House in Johannesburg to get answers about the payment due to them.
Image: Mduduzi Ndzingi

Families affected by the Life Esidimeni tragedy have threatened to take legal action against the Gauteng government for failing to pay an arbitration award due to them.

Yesterday, furious relatives of the Esidimeni victims approached premier David Makhura's office and the ANC's headquarters in Johannesburg for intervention.

In March, former deputy chief justice Dikgang Moseneke ordered the government to pay affected families over R1m each for their suffering following arbitration hearings into the deaths of 144 psychiatric patients moved from Life Esidimeni facilities.

The provincial government announced it had paid out R159.46m to all the 134 claimants by June.

However, Moseneke's judgment also made provision for people who did not attend the hearings but were affected by the Marathon Project.

One aggrieved family member, Mpho Padi, said about 200 families were informed that their awards would be paid out yesterday.

Padi said they were shocked to hear the government would no longer make the payments on December 10 as agreed.

Padi said they approached ANC head of the presidency Zizi Kodwa after Makhura failed to assist them despite numerous meetings.

"Comrade Zizi promised the Life Esidimeni victims who are grieving that this week we will get the answers we need from the premier who failed to address our issues," Padi said.

Salome Molope, whose mother Rebecca Molope, 55, was moved during the Marathon Project but survived the ordeal, said they felt disappointed by the government.

Molope said they were only told two days before that the payments would not come through.

"We were told that government does not have money to pay us.

Over 2‚000 bodies lie unclaimed or unidentified in Gauteng mortuaries

This feels like a second wave of trauma after what we have been through with the Marathon Project. They promised to pay us but now they are not keeping their promise," Molope said.

Kodwa promised to speak to Makhura before the end of the week on the matter.

He said they wanted to ensure that families get closure.

"We want to resolve this issue speedily," Kodwa said.

Provincial government spokesman Thabo Masebe said they encountered problems on the legitimacy of some of the claimants.

He said government has had to approach the Master of the High Court in order to issue families with letters of authority.