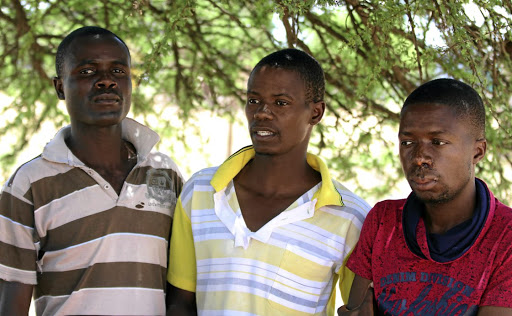 Two Limpopo farmworkers have accused their employer of racially abusing and assaulting them at a citrus and tobacco farm last week.

The workers said their employer in Marble Hall near Groblersdal referred to them as k******s when they stopped working on the farm as a result of strong winds.

Edmore Masango, 30, and Livious Ndlovu, 26, said they were attacked with a pick handle, leaving them with head and face injuries.

Masango said a stormy weather had forced them to park their tractors to allow the bad weather to subside.

"It was on a Wednesday in the afternoon when we were [busy] spraying pesticide chemicals on the orange trees when the weather changed," said Masango.

"I told my colleagues to stop [working] because it will be a waste to spray the chemical while the wind is blowing,"

He said his employer, Diaan Ras, started attacking them upon his arrival on the farm.

Ndlovu said he was still unable to eat or speak properly after the alleged assault. "I have been struggling to swallow food. I only eat soft porridge because my mouth is swollen," he said.

"I had to go to Groblersdal Hospital where I spent a night because they [the nurses] had to stitch my head."

Masango and Ndlovu said they have been working for Ras for two years, adding that they had been frequently subjected to harassment and verbal assault.

Ras said the matter was being attended to by his lawyer.

Monday marked 25 years since former presidents Nelson Mandela and FW de Klerk stood side by side to accept their joint Nobel Peace Prize.
News
2 years ago

"They claim I assaulted them. Unfortunately, I can't comment further because my lawyer is still dealing with the police regarding the issue," said Ras.

A third employee, who was also at the farm during the attack Mike Hlanganiso, 34, said he had gone to his room when the alleged assaults started.

Coll Moatshe Ngoepe said Ras was arrested for assault with intent to inflict grievously bodily harm. "He appeared before court on Thursday last week and the outcomes are still pending as the docket is still in court," said Ngoepe.