Stabbed boy 'did not deserve to die like that' 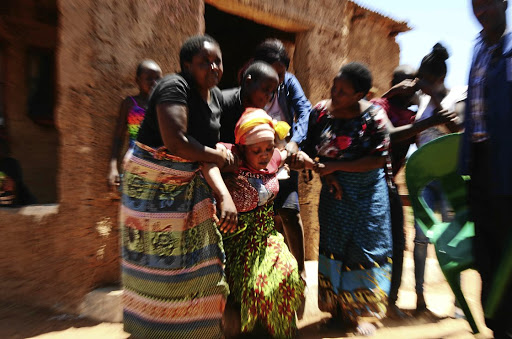 A distraught Ugania Nhongo whose seven-year-old son was stabbed to death at school, is comforted by relatives and friends.
Image: Mduduzi Ndzingi

"Mama please buy me cake when you come back from work."

These were the last words uttered by seven-year-old Charlton Karuweruwe to his mother Ugania Nhongo before he left for school on Monday.

Those words were the last 38-year-old Nhongo would hear from her son.

The little boy was stabbed multiple times at his school toilets in Dikeledi Makapan Primary School in Makapanstad, North West, allegedly by a 17-year-old schoolboy.

The suspect is a grade 11 pupil at Mankala Technical High School. The stabbing happened just less than an hour after Nhongo dropped her son off at his school, which is less than a kilometre from their home.

Yesterday, a distraught Nhongo could not speak to Sowetan team during a visit to her house.

Her sister Nothisah told how a call less than a hour after dropping off her son sent shivers down Nhongo's spine.

A grade 1 pupil has died after he was stabbed multiple times, allegedly by a grade 11 pupil.
News
3 years ago

"He was a good boy and he did not deserve to die like that."

Lehari heard how four pupils went to call the school principal Willy Modise to tell him that there was a big boy who was stabbing their schoolmate in the toilets.

Pupil ‘stabs’ teacher out of hunger

The boy who allegedly stabbed his teacher to death was unhappy because the man had refused him a second plate of food a few days before.
News
3 years ago

Lehari said on Monday the suspect told them that he was forced to sleep at the graveyard as his school transport had left him.

"He then came to the [primary] school and that is when he allegedly stabbed the little boy. This is a sad moment for the department and we are concerned about what happened here," Lehari said.

He said the department was going to assist the family, which originates from Zimbabwe, if the funeral were to take place in SA.

John Macheke, president of Congress of South African Student (Cosas), said they were shocked by the incident.

"Parents should always check their children's school bags and their phones to prevent these things from happening. The community should also support their schools," Macheke said.

The suspect is expected to appear before the Makapanstad magistrate's court today.