Pupil ‘stabs’ teacher out of hunger 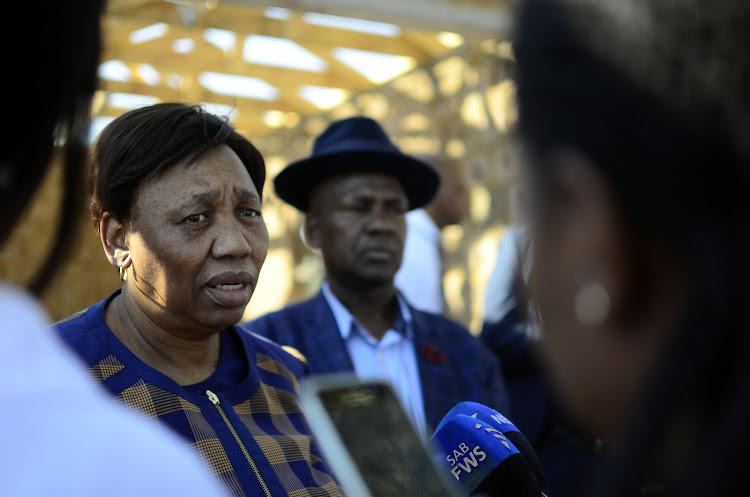 Basic Education Minister Angie Motshekga during her visit to the bereaved family of Gadimang Daniel Mokolobate, a teacher who was allegedly stabbed to death by a learner at Ramotshere Secondary School at Dinokana Village, Zeerust.
Image: Tiro Ramatlhatse

The boy who allegedly stabbed his teacher to death was unhappy because the man had refused him a second plate of food a few days before.

The 17-year-old went into a classroom and allegedly killed his teacher who was monitoring a class writing exams on Thursday. Gadimang Mokolobate, 24, was stabbed with a butcher knife at Ramotshere Secondary School in Zeerust, North West.

The pupil appeared briefly in the Lehurutshe Magistrate’s Court yesterday.

After his appearance, his grandmother spoke to Sowetan from her house in Dinokana. She said the boy normally went to school hungry as they often ran out of food.

She said the boy’s mother was unemployed and the family survived on social grants for the boy, his younger sibling and herself.

“We are really struggling and some days, he would go to school on an empty stomach.”

The 78-year-old woman said the boy had told them just before police took him away on Thursday that he had allegedly killed his teacher for denying him food.

She said her other grandchild was stabbed to death at school eight years ago.

The woman said her grandson’s behaviour had changed but she never anticipated that he would kill a human being.

“That is not how I raised him. He was very talkative but recently he was very quiet. He would just answer you and go to his bedroom and lock himself up in there,” she said.

She said ahead of the stabbing incident, the boy’s mother had asked him to go to church with her as she wanted the pastors to pray for him.

“He refused to go; we were all worried about him because we could see that he was not his normal self.”

The 17-year-old’s uncle said they would like to apologise to Mokolobate’s family, saying they understood their pain as the boy’s cousin was killed by another pupil at school.

“We know how the family of the teacher feels like; we felt the same way eight years ago. It is not a nice feeling and it’s frustrating, we are really sorry.”

The court postponed the case to tomorrow to allow social workers to start a full preliminary inquiry.

Meanwhile, basic education minister Angie Motshekga said solutions to violence at schools were bigger than security and fences. “This problem highlights that the question of school safety is… much deeper than that.”