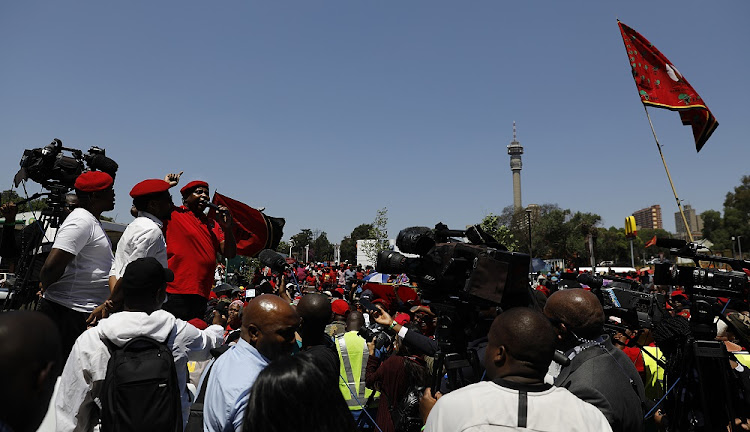 EFF deputy president Floyd Shivambu claims that Pravin Gordhan was made public enterprises minister with the aim of "destroying" state-owned enterprises so that they can eventually be privatised.

Addressing hundreds of EFF supporters outside the Tiso Blackstar building in Parktown, where Gordhan was appearing to give testimony about state capture, Shivambu said the minister's immediate task after his appointment by President Cyril Ramaphosa was to destroy Eskom and SAA.

“One of the immediate assignments of Pravin Gordhan in public enterprises is to destroy Eskom so that they can privatise it. It is to destroy the SAA so they can privatise it. We must never agree with any form for privatisation. That is why in the immediate, we must oppose these independent power producers because they produce electricity, they sell it to Eskom for R2 but Eskom can only sell for 82 cents. That is a recipe for disaster,” said Shivambu.

Labelling him the enabler of state capture, Shivambu told party members that the notion that Gordhan did not work with the Guptas was not true, noting that the party had approached the public protector for an investigation into the minister for allegedly lying in parliament about his meetings with the Guptas.

“We have since reported him to the public protector and said he must be held accountable and there must be exposure that he lied in parliament because we asked in 2015 whether he had met with the Guptas; he said he had never met with the Guptas. But he was working in close collaboration with them."

He also alleged that Gordhan used the spy tapes in 2009 to strong-arm former president Jacob Zuma into appointing him as finance minister.

“He had private intelligence in Sars [South African Revenue Service] called the rogue unit. He’s the one who gathered the so-called spy tapes, he’s the one who used those tapes to go and bargain with Jacob Zuma to say we’ll give you the tapes, drop the corruption charges and then you must assign me as the minister of finance,” charged Shivambu.

Among other allegations levelled against Gordhan is that the minister has an account in Canada which was used to receive bribery money from people who had tax problems during his tenure as Sars boss, and that his daughter has more than eight companies that have been doing business with the government.

"The allegations in total are rejected with the contempt they deserve," said Lackay.

"It is part of a prolonged sinister and malicious campaign to discredit witnesses like Mr Gordhan who comes to testify before the Zondo Commission about their efforts, over many years, to combat state capture and corruption and also to discredit and undermine the work of the Commission itself."

Meeting with Gordhan will not be ‘out in the open’: Mkhwebane

Public Protector Busisiwe Mkhwebane said on Tuesday that her meeting with public enterprises minister Pravin Gordhan would not be open to the media.
News
3 years ago

President Ramapahosa must come to to the aid of enteprises minister who is under attack from the so-called academics.
Opinion
3 years ago

Judge Raymond Zondo has asked for evidence from those who alleged that the state capture inquiry’s head of investigations‚ Terence Nombembe‚ ...
News
3 years ago

No details divulged after Pravin Gordhan's meeting with Busisiwe Mkhwebane