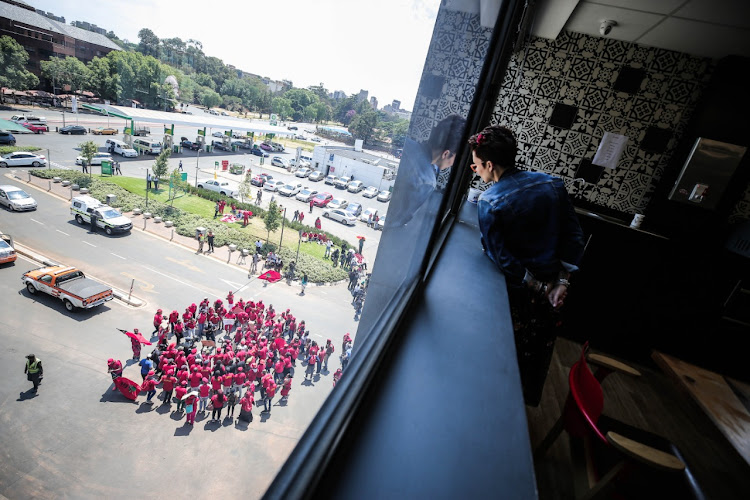 A staff member at Hill on Empire watches on as members of the EFF protest alongside members of the BLF outside the commission of enquiry into State Capture in Parktown, Johannesburg.
Image: Alaister Russell/The Sunday Times

Attitudes towards former president Jacob Zuma on Monday divided two anti-Pravin Gordhan pickets during his much-awaited testimony at the judicial commission of inquiry into state capture.

Vociferous groups of protesters from the Economic Freedom Fighters (EFF) and the Black First Land First (BLF) movement gathered outside the Commission of Inquiry into State Capture in Parktown, Johannesburg, calling for the public enterprises minister to resign.

Despite having the same objective, they faced off in two separate camps.

EFF Gauteng's Moshe Koma said they "could not picket with BLF", as it had protected an allegedly corrupt Zuma. "This very same BLF was supporting Zuma all along ... they are just using the platform to seek relevance," Moshe said.

More EFF members have joined the picket outside the #StateCaptureInquiry pic.twitter.com/37lde9Jmif

Meanwhile, BLF deputy president Zanele Lwana said the party would not join hands with the EFF, charging that the red berets' fight with Gordhan was just a means to settle political scores.

"When president Zuma fired Gordhan, it was them (EFF) that marched hand in hand with white monopoly capital calling for Pravin to be reinstated.

"Now evidently they have had a fallout with Pravin, this is why the leader of the EFF is quite vocal about (their call) that Pravin must resign - not because of principle or fighting white monopoly capital, but to settle political scores. The organisation is not genuine," said Lwana.

On their reason for the staging the picket, Lwana said Gordhan was conflicted and should not be in government.

"It means that under his leadership we are going to see the swift privatisation of the SOEs (state-owned enterprises) in this country, like SAA, like with Eskom being sabotaged and the agendas of the IPPs (independent power producers) are being pushed and demonising the nuclear agenda which is way cheaper," she said.

The Economic Freedom Fighters staged a protest outside the state capture inquiry on Monday November 19 2018 against public enterprises minister Pravin Gordhan as he took the stand to give his evidence. The inquiry is held at Hill on Empire in Parktown.

The EFF's Koma labelled Gordhan a white monopoly capital fraud. "He is as corrupt as the other corrupt ANC members, the entire ANC must fall," Koma charged.

"We are not going to wait for the ANC to recycle their leaders one by one, there is an outcry in the country for honest leadership of integrity that will never come out of the ANC."

Gordhan is expected to testify about attempts by Zuma to force through a nuclear deal with Russia and how the former president intervened on his friend Dudu Myeni’s behalf to help SAA strike an expensive deal with Airbus.

He will also reveal details about his contact with the Gupta family, with one face-to-face meeting having been arranged by Zuma.