Mabuza at the helm as Cyril woos investors overseas 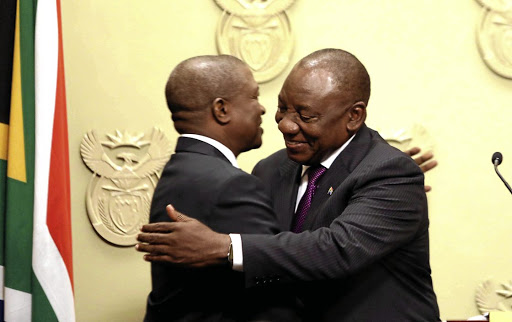 There has been a lot of speculation about Deputy President David Mabuza's whereabouts recently.
Image: Esa Alexander

Deputy President David Mabuza quietly returned from his sick leave abroad just in time to take charge of the country as acting president.

President Cyril Ramaphosa is in Europe on a trade and investment working visit in Brussels, Belgium.

There had been a lot of speculation about Mabuza's whereabouts after his office announced about three weeks ago that he had taken sick leave.

Sunday Times reported at the weekend that Mabuza was receiving medical attention in Russia following a health scare which his office did not want to give details of.

Normally, when a president leaves the country, an announcement is made about who would act in his absence.

But by yesterday, the presidency had not informed the country, and it took Sowetan to find out who was in charge of the country following Ramaphosa's departure on Tuesday.

In terms of the constitution, the deputy president automatically acts as president in the absence of the president, but if both are out of the country the president would appoint any of the ministers to act.

Ramaphosa's spokesperson Khusela Diko, however, confirmed to Sowetan yesterday that Mabuza is the country's acting president. "We have not as a norm announced an acting president on departure [of Ramaphosa]. I stand to be corrected, but I have never done that," Diko said.

Mabuza's health first took a knock three years ago while he was still the premier of Mpumalanga. He had fallen critically ill and was hospitalised for more than three months after he was poisoned.

Mabuza was speaking at Heritage Day celebrations in Kokstad in KwaZulu-Natal.
News
3 years ago

Mabuza, commonly known as "The Cat" or "DD", had told Sowetan about the cause of his illness only a year later in an impromptu interview on the sidelines of an ANC lekgotla.

Mabuza said at the time that he had let his guard down when he accepted food during his birthday celebrations in Bushbuckridge, Mpumalanga, in August 2015.

He said he almost died and could neither walk nor stand, with his weight dropping from 78kg to 44kg at the time.

It was not until he was transferred to a Pretoria private hospital that doctors made a diagnosis and found a foreign bacteria in his body. "They could not define it but it was the cause of the collapse of my system," Mabuza said then.

He had to be put on treatment that managed to slowly and successfully suck the poison out of his body before making a triumphant return to his office at the government complex in Mbombela in November 2015.

The DA entered the fray yesterday, raising concerns about the deputy president's whereabouts and Ramaphosa not announcing the acting head of state.

"The ANC government has literally left the country with no leadership and no time or effort was made to announce who will be acting in their absence," said DA chief whip John Steenhuisen.

He added: "The fact that no announcement has been made, in the wake of the deputy president going AWOL, raises questions on whether the country has been left in reliable hands."

He has visited Russia on a few occasions, allegedly with the help of the Guptas offering their private jet.
Opinion
3 years ago
Next Article