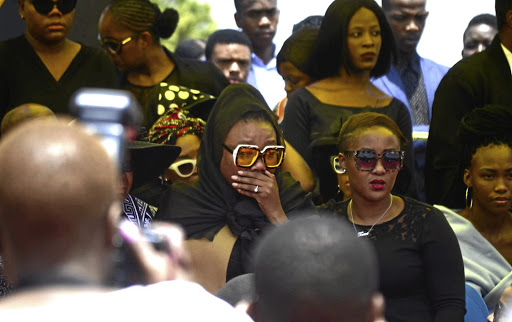 In a fightback after not being acknowledged at HHP's funeral, Lerato Sengadi has taken over the matrimonial home that she was banned from last week.

Sengadi, who was left out of his funeral obituary and ignored by most speakers, escalated the fight against the Tsambos yesterday.

She went to the home in Randpark Ridge, Randburg, accompanied by the police where she apparently broke the locks and replaced them with new ones.

"Lerato came around 1am this morning [Sunday] and broke the locks. She locked out the helper and her son who have been living there since 2004."

Ncana said the motswako rapper, also known as Jabba, was taking care of the helper's son. He said their family was shocked by the "vindictive mission" by Sengadi.

"For months Lerato has not been living in the house. What stuns everyone is that even HHP's son cannot access the house."

Sengadi did not respond to questions yesterday.

Ncana said the Tsambos will appeal the high court ruling that Sengadi was Jabba's customary wife.

He said they will challenge the order handed down on Friday, but would not elaborate on the reasons.

Lerato Sengadi’s application to stop the funeral of the late rapper Jabulani 'HHP' Tsambo has been denied.
News
2 years ago

Sengadi had filed for an interdict to stop the funeral and for the the court to instruct HHP's father, Robert Tsambo, to give her the muso's remains, which was denied by the court.

But the court ruled that Sengadi was HHP customary wife despite his father claiming that the family did not recognise her as his wife.

Judge Ratha Mokgoatleng found that HHP and Sengadi had entered into a customary union.

Sengadi had also asked the court to order the family to return all the documents and other belongings, including hard drives, that were removed from the musician's home in Johannesburg and to allow her access to the house.

The court ordered the Tsambos to return all of HHP documents, his hard drives and the keys to his home to Sengadi.

Women need to wake up and fight for their rights, like Sengadi did.
Opinion
2 years ago

The bitter standoff between HHP's common law wife Lerato Sengadi and her in-laws has escalated on the eve of his burial.
News
2 years ago
Next Article