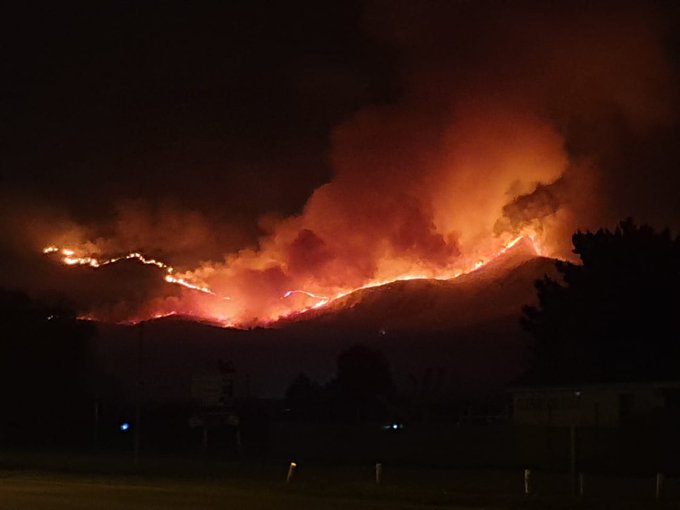 A fire raging between George and Oudtshoorn in the southern cape has killed eight people.
Image: SUPPLIED/Twitter @wo_fire

The death toll in the George blaze has risen to seven‚ emergency serves in the Western Cape confirmed on Monday evening.

All seven deaths have been in the Karatara area.

"We are trying to maintain the raging fires at this stage with the deployment and the fire brigades from various municipalities‚” said police spokesman Captain Malcolm Poje.

Speaking after the announcement of the first four deaths‚ Western Cape local government spokesperson James-Brent Styan said: “We are doing what we can. It's an ongoing struggle and it remains critical at this stage.”

A raging wildfire has forced authorities to temporarily close mountains in the Southern Cape for all outdoor activities due to safety concerns.
News
3 years ago

Earlier Monday Styan said the fire was "serious" and three areas were evacuated as a precaution.

By Monday evening‚ at least 200 people have been evacuated in the nearby Knysna area and are being housed in the Karatara Community Hall.

"The problem is the interface between the town and the forest where this fire is coming from. It is coming down from the mountain‚ down the Outeniqua Pass‚" Styan said.

The Western Cape Disaster Management Centre‚ Working on Fire and two municipalities were battling the raging blazes in the province.