Tribute to 485 firefighters after Knysna inferno 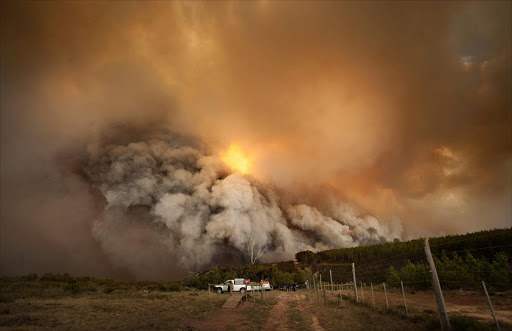 07 June 2017 Plettenberg Bay. A massive fire broke out at the Kranshoek Viewpoint area just outside the coastal holiday town early on Wednesday morning. It quickly spread due to strong wind and burnt along the coast and cut inland by midday towards Cairnbrogie and the Kranshoek community. This is just one several fires which raged between Plettenberg Bay and Mossel Bay yesterday. (Photo Ewald Stander)

Bringing the Knysna fire under control has been a truly South African effort thanks to more than 400 Working on Fire firefighters from around the country. The firefighters – men and women – have been working tirelessly since Wednesday last week to prevent further death and loss of property.

On Thursday‚ as smoke still billowed from among the trees in the commercial forest surrounding the town‚ a helicopter carrying water occasionally flying over Knysna‚ Western Cape premier Helen Zille along with other government officials‚ including Cooperative Governance and Traditional Affairs Minister Des van Rooyen and Environmental Minister Edna Molewa‚ paid tribute to the 485 firefighters.

“This is the biggest fire disaster in living memory and one of the most devastating. If it wasn’t for you‚ the extent of this disaster would have been unimaginable‚” Zille told the firefighters.

“These kinds of natural disasters are going to occur more often because of climate change and because of other things. And so you are the backbone of keeping people safe and keeping property safe.”

This story was published by The Herald