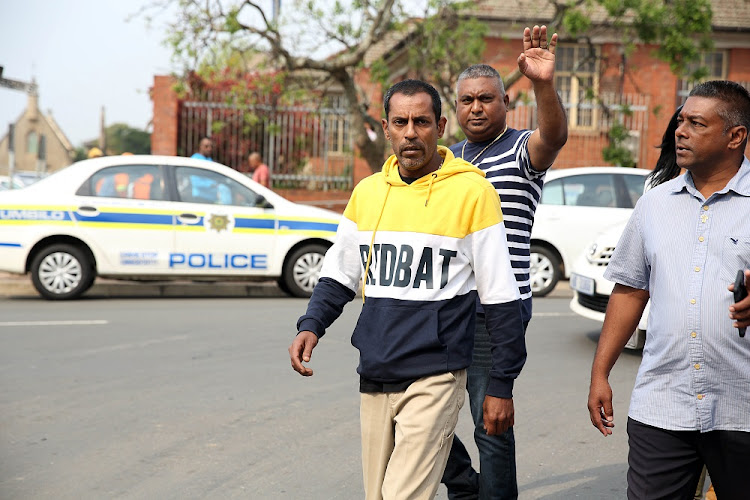 (Yellow sweater) Sagren Govindsamy father and husband of the three that were killed in Phoenix last Friday outside the Verulam Magistrate's court on Tuesday.
Image: THULI DLAMINI

The husband and father of three slain Phoenix women sat with his head in hands outside the Verulam Magistrate’s Court on Tuesday as he waited for the man accused of their murder to apply for bail.

Sagren Govindsamy appeared dazed and overwhelmed as he sat quietly while community members gathered for a small protest.

Police arrested a 45-year-old man for the murders of Jane‚ 44‚ and her two daughters Denisha‚ 22‚ and 16-year-old Rackelle at their flat in Tasvir Mansion in Longcroft‚ Phoenix.

On Friday police had responded to a report of murder at Longcroft Drive in Phoenix.

The 45-year-old man arrested for a triple murder in Phoenix‚ Durban‚ will appear in the Verulam Magistrate’s Court on Tuesday.
News
3 years ago

On their arrival they found the bodies of Jane and Rackelle. They later found Denisha’s body in a cupboard.

According to police Jane knew the man they arrested.

When approached for comment on Tuesday‚ Govindsamy shook his head indicating that he did not want to speak. He was immediately whisked away by a family member into the courthouse.

However‚ Govindsamy is reported to have told The Mercury that the suspect was not known to their family.

Scores of family and friends waited outside the court for the suspect’s appearance.

The husband and father of the Phoenix triple-murder victims attended his first court appearance on September 25 2018. He waited patiently in the public gallery at the Verulam Magistrate’s Court to face his family members’ alleged murderer.