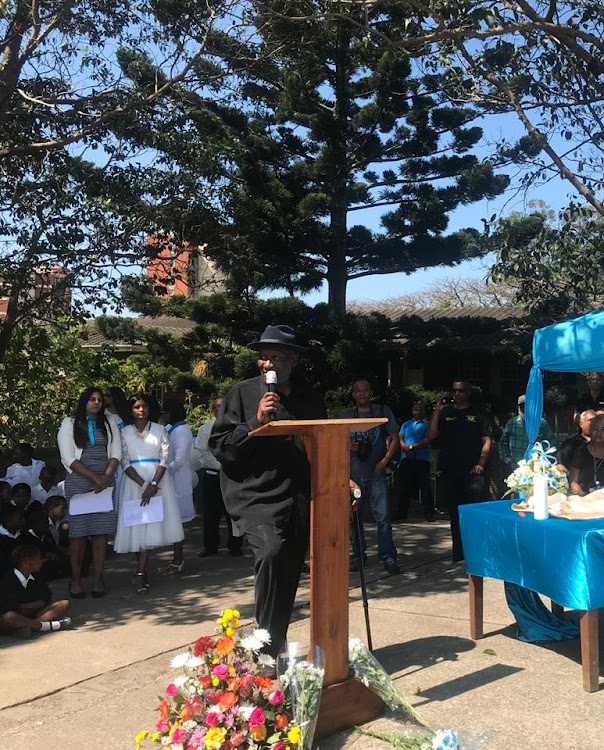 Police minister Bheki Cele revealed that authorities would move to revoke the bail of Mohammed Ebrahim‚ the man accused of the murder of Miguel Louw.

Cele was speaking at a memorial service for the murdered Sydenham boy at his school‚ Rippon Road Primary‚ on Friday.

Louw had disappeared on July 17 and had last been seen in the company of Mohammed Ebrahim‚ a butcher and colleague of his mother.

His decomposed body was found in Phoenix‚ a stone's throw from Ebrahim’s family home‚ last week.

The 43-year-old was arrested three days after the schoolboy vanished‚ and several days before the body was found had been remitted on bail‚ although he was never released because no one could post the R2‚500 bond.

“We are glad that somebody is in the hands of the police. The person is still not out of prison because he could not pay but I am told my officers will be in a position to challenge [the granting of bail] because of the strength of the case they have‚” Cele said.

“The person [Ebrahim] was known to the family and he was no stranger to them‚ this makes my point‚” he added.

Cele said that parents should take extreme care in monitoring who plays an active role in the lives of their children.

“Each time you hear these stories [it appears these] children who perish at the hands of people they know‚” he said. “Parents must have extra vigilance in allowing family friends‚ even relatives‚ to have access to children. We need to enhance the preventative measures which we put in place. We need to teach the gospel of extra vigilance when it comes to matters of children‚” he said.

Louw’s funeral is expected to be held in Sydenham tomorrow.

Body found in ravine is that of missing boy Miguel Louw

The decomposed body of a child found in a ravine in Phoenix last week is that of Miguel Louw‚ his family confirmed on Wednesday.
News
3 years ago

Post-mortem for decomposed body believed to be missing Miguel Louw

The decomposed body of a child – believed to be that of missing schoolboy Miguel Louw – will be examined by state pathologists on Wednesday.
News
3 years ago

The vanishing of 9-year-old Miguel Louw has haunted the dreams of Sheik Ebrahim Shah‚ the man whose son is the police’s prime suspect in the ...
News
3 years ago

KwaZulu-Natal Community Safety MEC Mxolisi Kaunda has called for calm in Phoenix after the discovery of a body thought to be that of missing Sydenham ...
News
3 years ago
Next Article