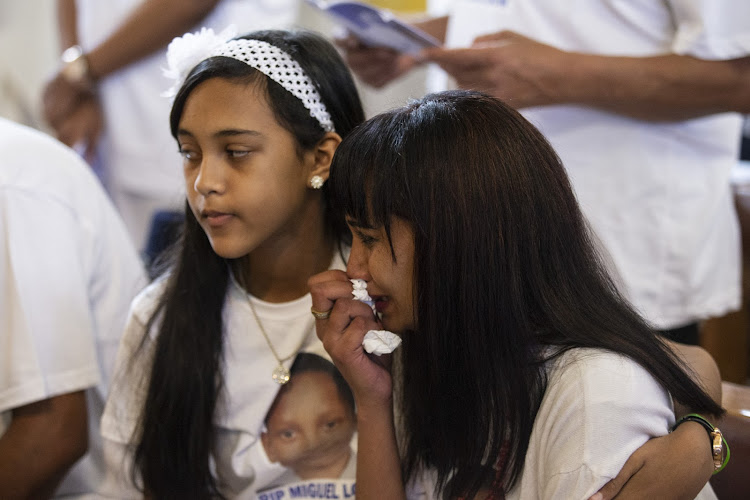 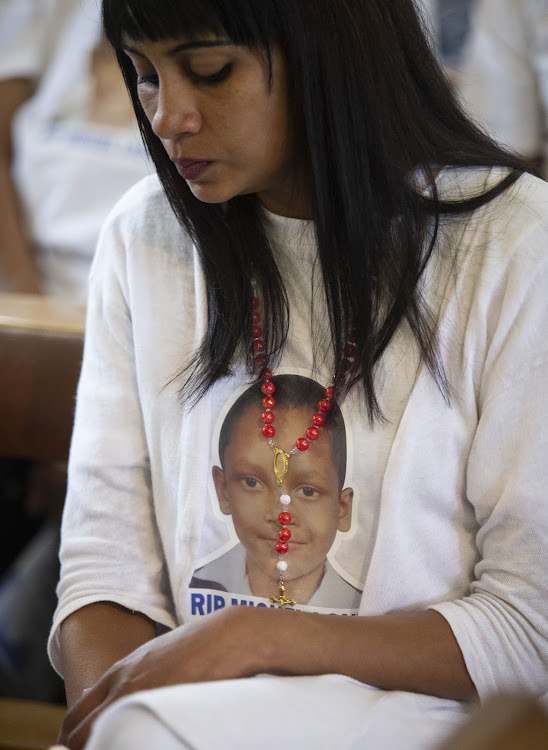 An inconsolable Raylene Louw clung to her daughter Mikayla as the small white coffin‚ which contained the remains of her murdered child Miguel‚ was carried by pall bearers out of St Ann's Parish in Sydenham‚ Durban‚ for his private cremation on Saturday.

Miguel's "celebration of life" funeral‚ which brought scores of mourners mostly dressed in white to pay their final respects‚ marked the end of more than two months of despair‚ uncertainty and tears for the Louw family.

A single white balloon‚ which bore Miguel's name and angel wings‚ was attached to his coffin. Most of his family wore white t-shirts‚ with his face on the front and the touching words "Heaven has gained another angel and a piece of my heart" emblazoned on the back.

Miguel disappeared on July 17 and was last seen in the company of murder-accused Mohammed Ebrahim‚ a butcher and colleague of his mother.

The 43-year-old‚ who was arrested three days after the schoolboy vanished and several days before his body was found‚ had been remitted on bail‚ although he was never released because no one could post the R2‚500 bond.

On Saturday‚ before Miguel was laid to rest‚ his aunts spoke proudly of the little boy whom they described as "humble"‚ "angelic" and "quiet".

"Miguel was not streetwise. He was over-protected. He was loved dearly by everyone‚" added the one aunt‚ who only identified herself as Miguel's father's sister. Reverend Father Ndodana Tshuma‚ who conducted the funeral service‚ was hyper-critical of South African society and violence against children.

Mikayla Louw reads a poem during the funeral of her brother #MiguelLouw @TimesLIVE pic.twitter.com/xnJSzqwshH

He appealed to the angry community not to take the law into their own hands.

"It's not only the family of Miguel who is heartbroken‚ it is everyone... all of our hearts are broken.

"Miguel has touched our lives and that of every person here‚ even those who are not here."

Tshuma said Miguel's death was not in vain.

"Miguel has become that one person who stands for the thousands of children who have been abused‚ victimised and whose lives were shortened. Miguel in his short life has done a lot‚" he said.

Mourners were brought to tears when the touching Bette Midler song "Wind Beneath My Wings" was performed in tribute to the little boy.

His sister Mikayla also paid homage to her brother by reciting a short poem‚ which spoke of grief and pain from losing a loved one.