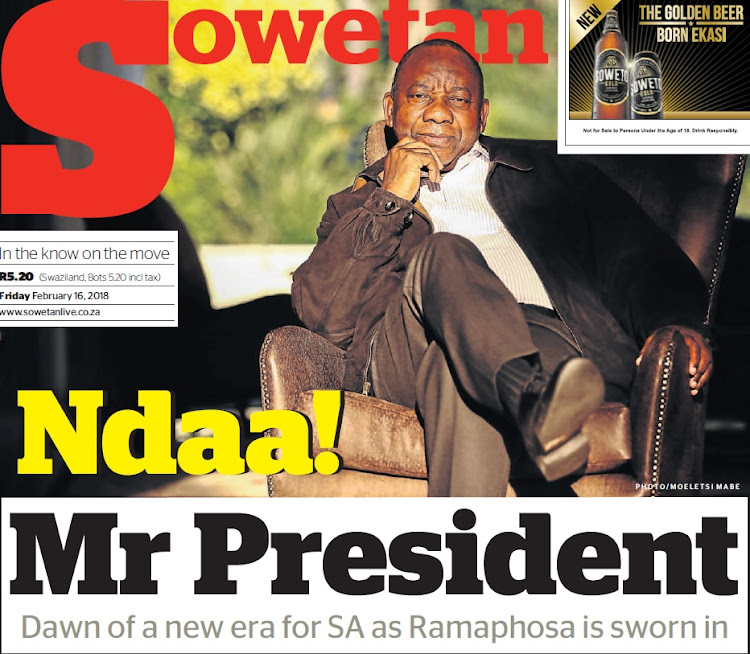 I was heartened when Sowetan published a front-page with the headline: "Ndaa, Mr President!"

A white friend asked: "What does ndaa mean?" I explained: 'It means hello!"

The friend frowned, and said, "But I always thought sawubona was the word for hello."

Instead of blowing a fuse, I explained that sawubona is a Zulu greeting and ndaa is the Venda equivalent.

The decision to use Venda was spot on. Unless you're Venda-speaking, or you're a fan of the soapie Muvhango, you hardly ever hear this language being spoken.

That it has been used so prominently in mainstream publications fits in neatly with the Pan-South African Languages Board's agenda to use February as a month to promote indigenous languages.

SA had a leader who sang and danced and gave us new words like Zupta, state capture and Saxonwold shebeen
News
3 years ago

The promotion of indigenous languages shouldn't be done simply because it's cool. Our languages should be taken seriously enough to be used as mediums of instruction in schools. There is enough evidence that children taught in their home language are more likely to succeed in school than their counterparts who learn in a language that is not their own.

It is no accident that many Afrikaners still insist on keeping their schools as Afrikaans-medium institutions where everything is taught in Afrikaans.

I always hear the ridiculous notion from black friends that African languages are not advanced enough to be used to teach such subjects as mathematics, science or geography.

In the Cofimvaba district in the Eastern Cape they have been teaching mathematics in isiXhosa for a while, with astounding results.

There's no word for photosynthesis in Tshivenda? Create it and put it in a biology text. That's how the Afrikaners do it.

While it is true that English is the language of commerce and academia, this truism is exaggerated.

If you have worked in the corporate world in Cape Town, Pretoria and Bloemfontein you would know that Afrikaans is the preferred language in boardrooms of most companies in those cities.

Afrikaans, as we all know, is a new language that remained unwritten until the early 1900s. However, with the political will, it was supported and promoted by successive Afrikaner administrations and the private sector.

Books in this new language were written at neck-breaking speed.

It is no accident that the majority of books published in this country are in Afrikaans and not English.

I don't need to tell you about the technological breakthroughs from China and Japan where indigenous languages are used to teach science and commerce.

Yes, they do teach executives some English so they converse with clients and counterparts in the Western world. But English is not the main focus.

English is important, but it shouldn't be the be-all and end-all. The ideal situation would be for our children to be fully bilingual.

The tendency in the black community is for parents to discourage their children from speaking their home tongue altogether; this in the mistaken belief that the absence of an indigenous language will automatically improve the little one's English proficiency.

You end up with black children who can't speak their mother tongue; and whose English, though spoken in a whiny, copied-from-TV accent, still sucks.

Meanwhile, our Afrikaner fellow countrymen, speaking English in accents we often make fun of, are galloping ahead us.

I haven’t been to the mountain and I haven’t been oppressed. But I saw something in Black Panther that made me proud to be an African.
Entertainment
3 years ago

OPINION: Time to say thank you for singing, dancing

End of an error, indeed Is it just not awesome finally getting off the cuckoo Planet Zuma? It was getting rather tiresome watching this game of The ...
News
3 years ago
Next Article